Blog
You are here: Home / Blog / Random Stories / The future of design: AR will be bigger than the internet

Soon, a new era of experimental design and design thinking will be upon us. We’ll have entirely augmented experiences everywhere we walk, and voice design is the next big horizon for creatives.

Belsky took to the stage in London at an exclusive Adobe event earlier this summer to talk through the challenges and opportunities presented by emerging technologies – and to forecast the future for designers. 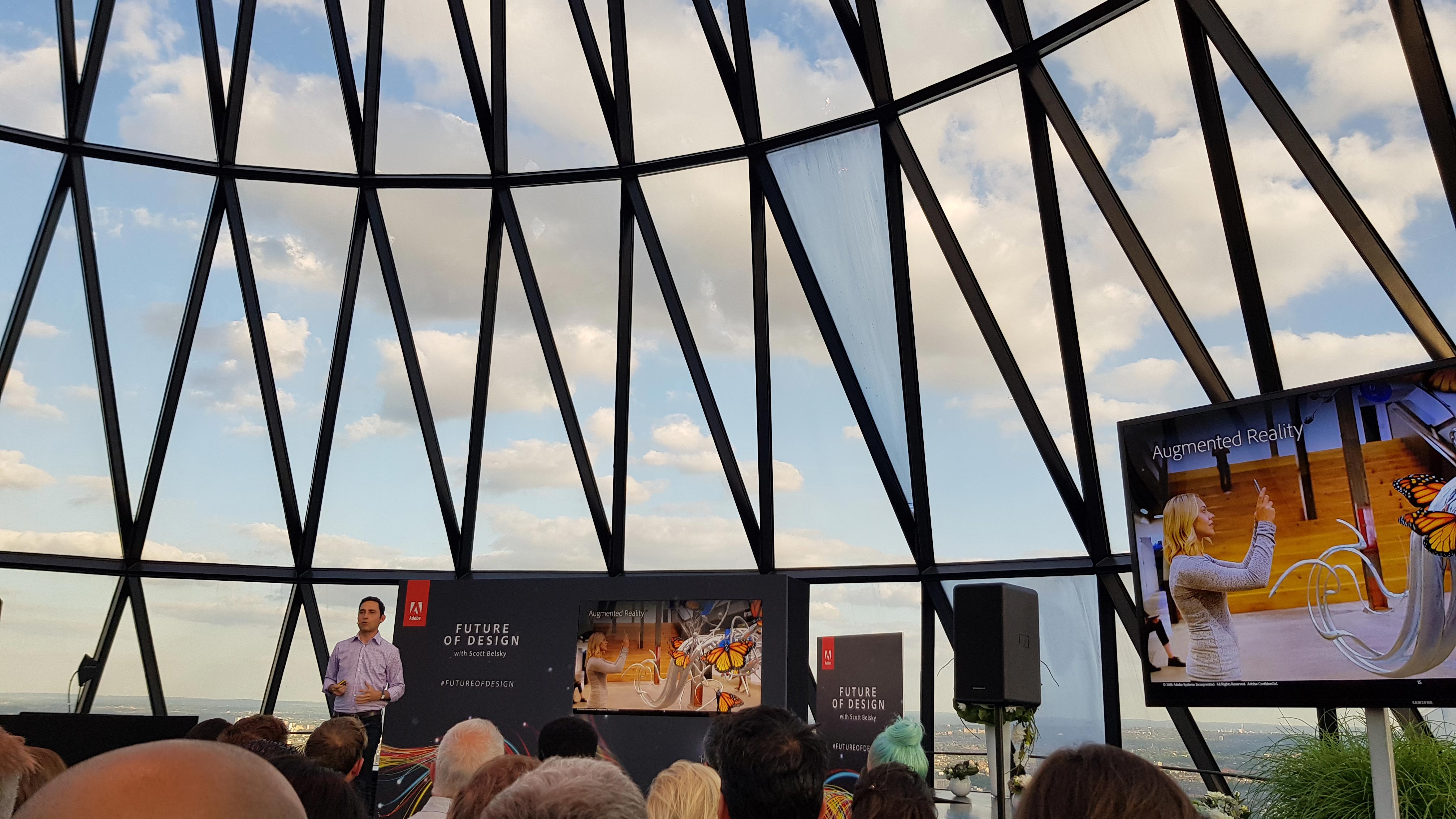 Scott Belsky at Adobe’s Future of Design event in London

As the future becomes increasingly commoditised, he said, creativity – and the role of user experience designers, particularly – will become increasingly important.

"Companies are putting designers at the head of the table," he explained. "The user’s experience of technology these days is even more important than the tech itself. The UI is what distinguishes a product; a company. That’s one reason why designers are being employed across industries.”

Get 15% off Adobe Creative Cloud with our exclusive offer

In fact, when Adobe spoke to hiring managers at a range of top companies, 87 per cent of them said that UX designers are some of their most critical hires right now.

So aside from a bright future for UX designers, what else is next for design? Here are five predictions Belsky made at the event – followed by an exclusive conversation with Creative Bloq, in which he explores the biggest new challenges and opportunities designers should prepare for.

We’ll soon have entirely augmented experiences everywhere we walk. AR will be as critical as the web,” Belsky predicted, adding that this is why Adobe has developed Project Aero, a powerful new augmented reality tool that makes it easier for designers and developers to create immersive content, and bridge the gap between the physical and digital worlds. More on that below.

“It’s the simplest interface of all, so we need to be able to design for it,” he said. Voice design tools are being brought into Adobe XD because we’re moving into a voice-driven world (think: Amazon Echo and Google Home) – and it’s raising many questions for designers, not least ethical ones.

Labour will become increasingly automated, with AI and machine learning helping creatives work smarter and faster by taking on repetitive tasks. “AI is a vertical of creativity,” said Belsky. “Think of it as a creative assistant.”

New tools like Adobe Capture – which turns photos on your phone or tablet into creative assets – will continue to deliver on the creative freedom promised by Creative Cloud in increasingly unique ways. “There’s an idea that in some ways we’re still chained to desktop – we expect to do our professional work there,” he said. “But that’s not where creativity happens.”

What are our responsibilities for the end customer experience? What is the responsibility of the designer in preserving a consumer choice? When using visual search, such as Google, you're presented with a lot of options. Using a voice interface, this might not be the case – so who chooses which option you get, and how can you ensure the consumer’s best interests are served? Ethical questions have always been important, but in this new age of design they're even more so.

New challenges and opportunities for designers 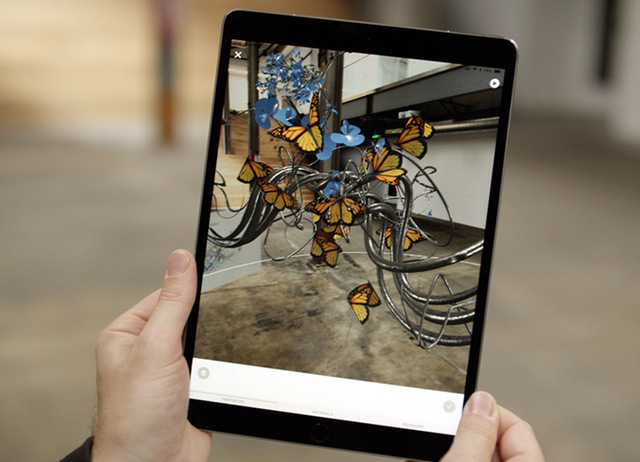 Project Aero: immersive media is poised to become the next disruptive platform. Welcome to the first wave of mainstream AR

So will AR really be bigger than the web? What sorts of questions is voice design raising? And what skills will designers need to meet the future of design head-on? We caught up with Belsky after the event to find out more…

What are the biggest opportunities of AR for designers?

Scott Belsky: I believe AR will do almost everything the web does for us, but in the context of our physical world, rather than on a screen. It will change the way we do everything from finding our way around cities, to reviewing the menu in restaurants, to dating, to fixing appliances in our homes.

AR will do almost everything the web does for us, but in the context of our physical world, rather than on a screen. It will change the way we do everything.

Augmented Reality will enrich these experiences in ways we can barely imagine. However, none of this is possible without designers creating compelling three-dimensional interactive content and being able to collaborate with developers across platforms.

AR and voice have the greatest potential to disrupt the way we experience the world. Every business group across Adobe is thinking about and building for AR because we strongly believe that it’s a transformative medium. AR is at the intersection of our physical and digital worlds, and requires a fundamentally different paradigm for interaction and design beyond the traditional screen experience. Designers will have the opportunity to literally design a new reality, and that’s going to be fun and challenging.

How soon will AR be everywhere?

SB: We’re at the beginning of a journey with augmented reality. We believe that Project Aero is breaking new ground, with the goal of simplifying the development of AR content, delivering an even more powerful medium for storytelling for artists and designers around the world. Through our collaboration with Apple, Pixar and other partners, Project Aero will give creative professionals the ability to create more authentic experiences.

What’s compelling is the quality and depth of the imagery, which makes the experience real and even more vivid. The industry is evolving at a rapid pace and there will be commercial and consumer demand for these types of experiences.

We see the potential of AR experiences to enable new forms of creative expression, spawn new customer experiences, and ignite new business models that we can’t even imagine today. We envision immersive media ultimately becoming ubiquitous in everyday life.  We’ll have a new interface through which we interact with a range of retail, news, search and other common applications.

What are the biggest challenges of AR for designers? How will Project Aero help?

SB: Most designers I speak with are excited about AR, but have no idea where to get started designing immersive experiences and how to work with developers to make them a reality.

For the first time, designers will be able to lay out and manipulate designs in physical spaces with a ‘what you see is what you get’ tool, making AR creation more fluid and intuitive. What’s more, delivering these immersive experiences to audiences on mobile devices will become faster, easier and safer.

How can designers get ahead in voice design?

SB: Design is becoming more immersive and voice has become more important. Increasing numbers of people use a voice interface to order dinner, choose music, set reminders, and so many other tasks, thanks in large part to consumer products like Amazon’s Alexa and Google Assistant.

Smart speakers will be installed in more than 70 million U.S. households by 2022, according to a Juniper Research report, and consumers have high expectations of voice technology because they’re used to naturally interacting and talking to people. For designers, creating voice user interface (VUI) experiences requires new skills that transcend the keyboard, mouse and screen.

For designers to be successful in the future, they’ll need to know how to create a voice interface that is efficient and intuitive.

For designers to be successful in the future, they’ll need to know how to create a voice interface that is efficient and intuitive. Our goal is to help designers succeed in this medium and in the broader world of immersive and interaction design. That’s one of the reasons we’ve invested so heavily in Adobe XD as an experience design platform that can adapt to new modalities over time.

Adobe XD brings prototyping and design together, which has unlocked new capabilities including allowing designers to easily switch from wireframes to prototypes and use tools such as After Effects to add deeper animations to their UX/UI designs. Unfortunately, I can’t share more now, but you’ll see a massive amount of innovation from us as it relates to XD in the coming months.

What are the biggest hurdles posed by voice design?

SB: As I mentioned, there has been a tremendous growth in voice-enabled devices. For designers, creating VUI experiences requires new skills since you cannot simply apply the same design guidelines to VUI, as you would a graphical app or web experience. Designers must have a deep understanding of human communication and natural conversation flow to design for VUIs.

Additionally, it requires a mindset shift to design for this medium. VUIs need to contain the right amount of information to meet users’ expectations and provide users with information on what they can do with the technology. For example, proactive prompting along the lines of, 'What can I help you with today?' might help a user get started. Without visual guidance, it’s easy for the user to get lost.

There are, of course, ethical considerations when it comes to VUI design too. For example, designers will need to carefully consider how often the technology is listening or recording, and clearly spell that out for the user. Companies and their designers will need to ensure privacy is baked into the product from the start.

Another important issue in voice is the default settings. When you ask your voice assistant to order flowers, what service does it default to using? Making tasks easy is great for consumers, but the design will have to make it transparent how those tasks are happening and give users the option of changing the defaults so they can personalise the experience.