Paying by tapping your phone instead of your credit card seems like a great idea. The technology has been around ever since NFC came out, and there are a few banks that have applications that are capable with it. Now Rogers is getting into the banking game. Since they are a telecom the process should be easy? Right? What’s required:

Lots of requirements are required, not to mention there are some phones that are NFC capable however are not included with the application which automatically excludes the user. At the time of writing these are the handsets that are compatible with the Rogers SureTap Wallet App:

I went to the Rogers store and picked up a NFC sim card listed at $9.99+tax at the time of purchase. Rogers (over the phone) was offering free NFC sim cards, however I wanted a NANO sim card and I had a feeling because I was testing it with Z10 that Rogers would mail me Micro sim card instead.

Swapping current nano sim card to NFC nano card was fairly easy on Rogers.com My Account. The change was instant, took less than 2-3 minutes to do.

Next was to download the application. Since I was using a BlackBerry Z10 I went to the BlackBerry World app and download Rogers SureTap Wallet. I registered and apparently during the registration process there is additional information that is burned on the NFC sim card. The process was easy and I had my Rogers SureTap Wallet successfully installed. The security involved is a 4 pin password requirement along with two security questions.

Now to add a card, at the time of posting Rogers was offering their branded Rogers MasterCard with additional credit included. I added the card and this process did take a bit for the card to be downloaded (approximately 2 hours). Once that was done I was set. Time to test.

Here’s the list of merchants that is successfully worked:

The list of merchants that did not accept suretap (seem to accept only swipe or chip insertion):

How to get SureTap to work:

When the merchant tells you the total, and asks you how you are paying. Simply say Master Card. The merchant will usually tell you “go ahead when ready”. On your phone click on the SureTap Wallet app, type in your 4 digit password, click on your Rogers MasterCard and click on Pay Now. Place your handset over the terminal (rest it on top of it if you can). Wait for the “beep”, and leave it for additional 2-3 seconds. That is. The coin term “TAP”, does not work. I find it that the transaction would initiate, however time-out after the beep.

Please note that I had the application pre-loaded each time with my 4 digit code entered, the only step left was to click on Pay Now. I found that on Z10 it took a while to do it from scratch, and one of the merchants cash register actually timed out while I was trying to load the application. For full proof use, load it ahead of time while the merchant is scanning the merchandize.

The most common scenario is that people will end up switching phones, or wipe the phone clean (format it). What happens to the SureTap Wallet then? Also what if I wanted to run SureTap from a backup, was it possible? Here we go.

First test was, I backed up my Z10. I grabbed my BlackBerry Passport and tried to restore SureTap Wallet to it. Keep in mind that Passport is not on the accepted list of phones. The restore was successful, however the application would get stuck on the splash screen. SureTap wins this one.

Next, I wiped the Z10 clean and performed a restore of just the SureTap Wallet application. When I loaded the application I received strange errors, that the proper sim card wasn’t inserted, etc. SureTap wins this round as well.

Next, I wiped the Z10 one more time, and freshly installed SureTap Wallet application. It asked me for my 4 digit password. I entered it, and all of a sudden it presented me with the 1st security question (please note that you are only asked the 4 digit code when you setup) that I created a month ago. The odd part was that I actually forgot. Not to mention that the responses were case sensitive. I got my first response wrong, and then I was presented with a second security question. Needless to say, I typed that one wrong as well.  The application locked me out. SureTap wins. I was asked to call Rogers for them to unlock the application.

I phoned Rogers, and the rep unlocked it. A temporary 4 digit password was sent. However, here’s the kicker, when I entered the 4 digit temporary password, it said that the code was wrong. I typed in my own 4 digit and it accepted. Strange. First flaw in the SureTap system. What would happen if I forgot my 4 digit password? 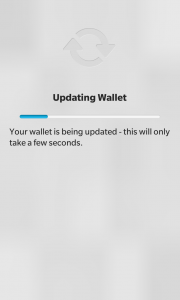 However, after about 5-10 seconds I receive the screen below(tested with LTE, 3G, EDGE and WIFI) 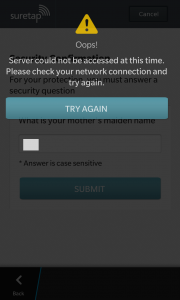 After you click on “Try Again”, it takes you back to your 4 digit password. The process and the cycle are in the never ending loop. I tried reinstalled the application, reloading the operating system. Nothing worked.

I reached out on twitter to @RogersHelps (Really helpful staff at Rogers). The rep refreshed my account, and tried a few things out, however nothing really changed. The issue was escalated and it could take 10 days to fix.

Rogers Suretap Wallet seems to work, I do find it slow on my Z10 (hence I had to have it pre-loaded while the cashier scans the product). I found it NOT to be a TAP solution, more like HOLD and WAIT to pay.

I’m curious how they will fix my problem, I have the 4 digit password and the security words. It seems to me that there might be a additional layer of security that has blacklisted my sim card or my IMEI. Unfortunately, I don’t have another approved device to try and test if the situation would change with a different IMEI.

I have to wait 10 days for them to fix the issue. When you think about it, 10 days is unacceptable, especially when money/paying is involved. I will keep you updated if my Wallet gets sorted.

UPDATE (January 22, 2015): I called Rogers SureTap Wallet 1-855-640-7914 phone number. The rep I got told me that they no longer have access to accounts as of Monday. And that the back office team is working on the issues. My ticket has also not been viewed yet. Therefore, who knows how long until I see my SureTap Wallet again.

Please do note that I did try to access SureTap Wallet and the connection kept timing out. I got a new JAVA error which I’ll post later.

UPDATED (March 2, 2016): Rogers has officially decided to pull the plug with SureTap as of April 30, 2016. If you have funds, try to spend them or request a refund: https://suretap.com/refund/

It was a very promising project that failed at launch. Too many different handsets, and every handset had some sort of an “App” issue. Its a shame.