She may live in a castle and have her face on stamps and money, but Queen Elizabeth II does have to do a lot of boring admin. And it's not just signing legislation and sending 100th birthday cards, she even has to approve each and every stamp design produced by the Royal Mail.

It's not just Christmas designs either. These days Britain’s postal service is releasing more and more limited edition stamps in order to make some extra cash from a generation that don’t actually send many letters. 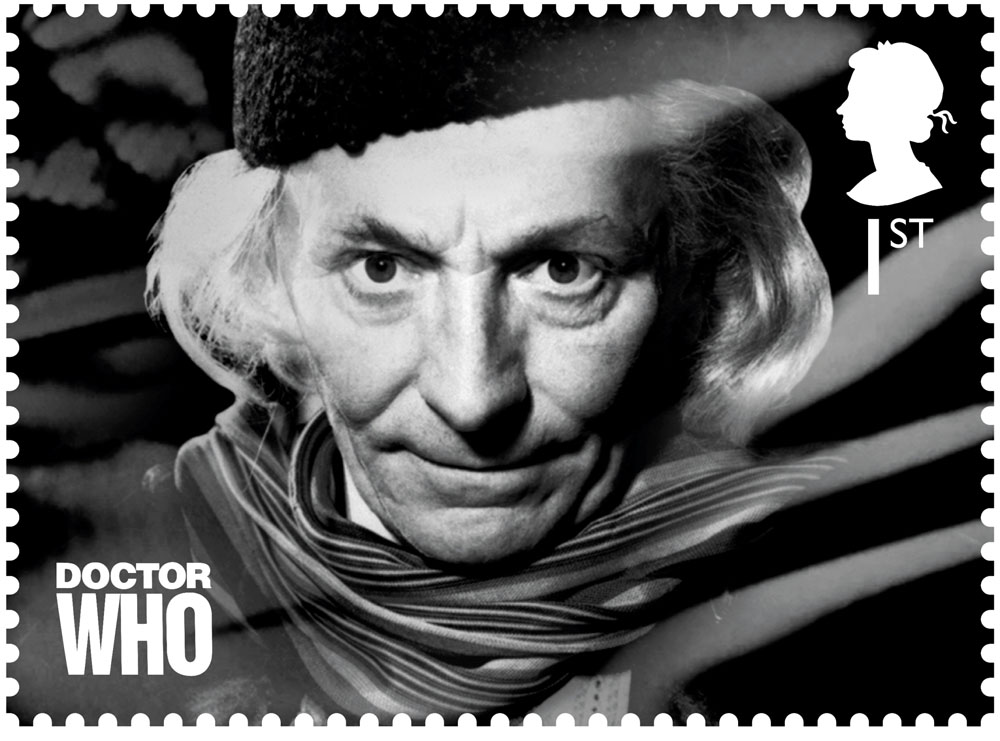 Released in 2013, this stamp design features William Hartnell as the first actor to play The Doctor

First screened in 1963, the day after John F Kennedy’s assassination, sci-fi show Doctor Who quickly became a Saturday tea-time institution for children and adults alike. Unfortunately by the 1980s its low budget effects looked increasingly anachronistic, and it was canned in 1989. But fan love for the show failed to abate, and a successful reboot in 2005 under the helm of Russell T Davies rewarded their patience several times over.

Assured a prime place in British television history, not to mention its future, Doctor Who got the Royal Mail seal of approval in 2013, the year of its 50-year anniversary.

The 11 first-class stamps combined each of the different actors to have played the Time Lord on TV to date, set against a backdrop evoking the ‘time tunnel’ effect shown in the opening credits. Our favourite is featured above. Framing the First Doctor as played by William Hartnell, it’s a simple but arresting composition that feels both of its time and strikingly modern; very much a case of ‘less is more’. You can view the full collection here. 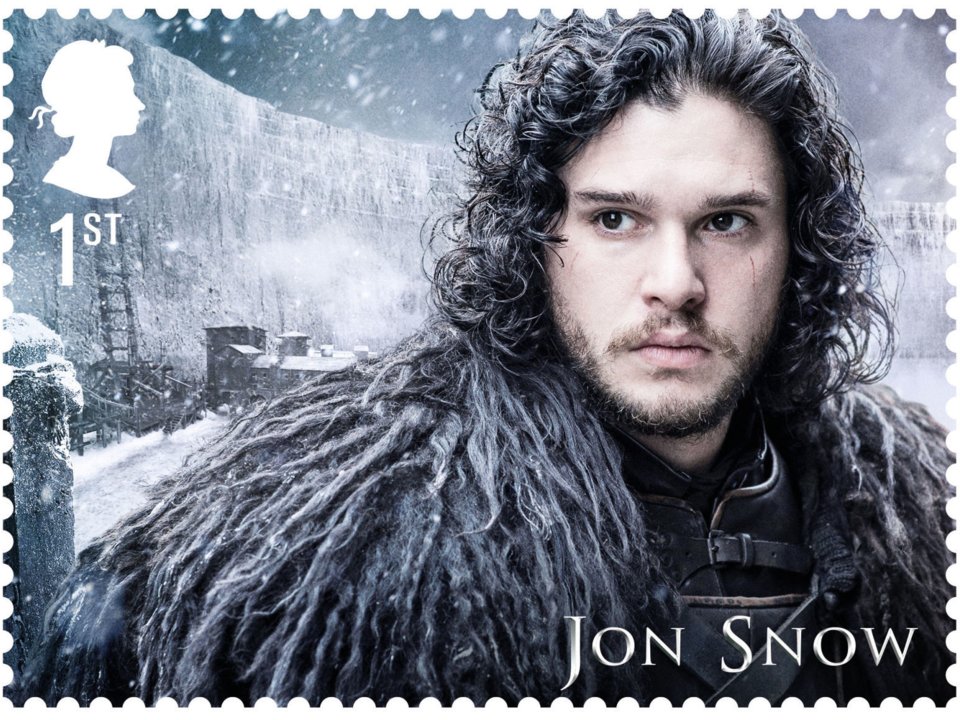 Launched this January, these stamps pay tribute to this popular fantasy show

The biggest fantasy TV hit of the 2010s, Game of Thrones, may be American-led, but the UK has provided the majority of actors and hosted most of the filming, mostly in Northern Ireland. So it’s fully appropriate for the Royal Mail to pay tribute to the show that even Penny, the non-nerd character in Big Bang Theory, likes – because, in her words, “It's got dragons and people doing it.”

Our favourite (above) portrays Kit Harington as Jon Snow, one of the show’s most popular characters and one whose parentage continues to be a source of frenzied speculation. Set against a snow-laden background, it’s a dramatic composition that beautifully sums up the epic bombast and big themes at the heart of the saga’s appeal. You can see the full collection here. 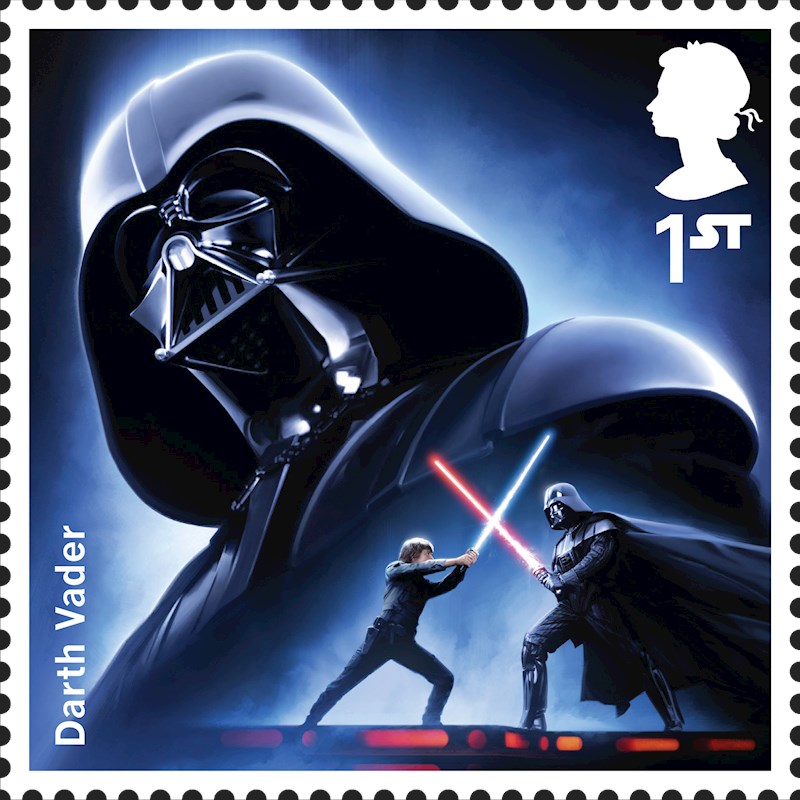 Luke faces off against Vader in this gloriously epic stamp design

In 2018, with disappointing box-office returns for the Solo spin-off, the Star Wars franchise is starting to look on shaky ground, but this time last year the space opera series seemed unbeatable. And as British involvement in Star Wars has been pivotal (the first, in 1977, was filmed at Elstree and Shepperton, and the most recent two in Pinewood), it made perfect sense for the Royal Mail to commission a series of stamps celebrating The Last Jedi.

Our favourite has to be the one above featuring Luke and Vader, the epic father-son struggle that lay at the heart of the first trilogy. Summoning the spirit of legendary Star Wars poster illustrator Drew Struzan, but translating a poster design into one that works in a tiny space, this is a great example of elegant minimalism. You can see the full range of stamps here. 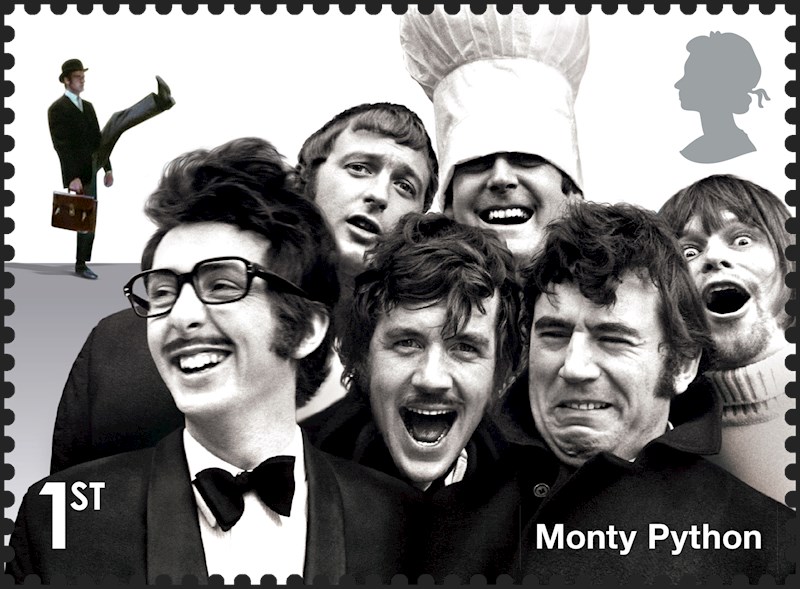 This tribute to Monty Python brilliantly harnesses their subversive spirit

It’s difficult to imagine how different comedy was before Monty Python’s Flying Circus hit our screens in 1969. Taking its cues from Surrealism and Dada art movements, the anarchic troupe completely reinvented what comedy could look like, in both their late-night TV show and ensuing films, including the widely banned Biblical parody, Life of Brian. Today the show's influence is obvious in everything from South Park and Family Guy to the phrases that have entered everyday speech (such as the use of ‘spam’ to describe unwanted emails).

This design was released by the Royal Mail, appropriately enough, on April Fool's day in 2015 as part of a special range of ‘Comedy Greats’ stamps. Featuring the classic Monty Python team of six (Graham Chapman, John Cleese, Terry Gilliam, Eric Idle, Terry Jones and Michael Palin), it’s a perfectly chosen shot that effortlessly captures the untrammelled energy of the young team. And it’s been beautifully integrated with an image of John Cleese from the Ministry of Silly Walks sketch, providing an instant blast of nostalgia for any Brit of a certain age. You can see the full range of British comedy stamps here. 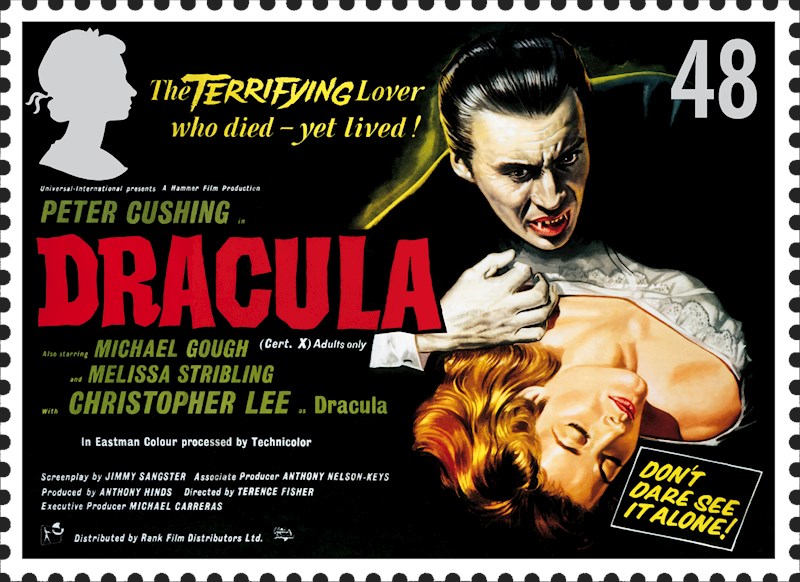 This stamp design, based on 1958 movie Dracula, brilliantly conveys the melodramatic essence of Hammer Horror

When the British film industry looks back on its glorious past, it tends to focus on the highbrow and critically acclaimed stuff, from Alfred Hitchcock to Ken Loach. But it’s important to remember that some of the most successful and popular British movies have been more towards the cheesier end of the scale. And so in 2008, the Royal Mail decided to pay tribute to two so-bad-its-good traditions in UK film-making: the Carry On series of bawdy comedies, and the melodramatic series of horror movies made by Hammer Films between the 1950s and 1970s.

Starring Christopher Lee as Count Dracula and Peter Cushing as Van Helsing, Dracula was a critical and commercial hit on release in 1958, and it’s now considered a classic of the genre; ranked the 65th best British film ever in a 2017 poll for Time Out magazine. And this marvellously crafted stamp harnesses the best of horror poster and book jacket design in reminding us of just what an impact it made on audiences.

The colours, typography and use of hyperbolic quotes are all note-perfect, and the way that the Queen’s silhouette has been effortlessly co-opted into the design is quite unnerving. You can see the full range of stamps here. 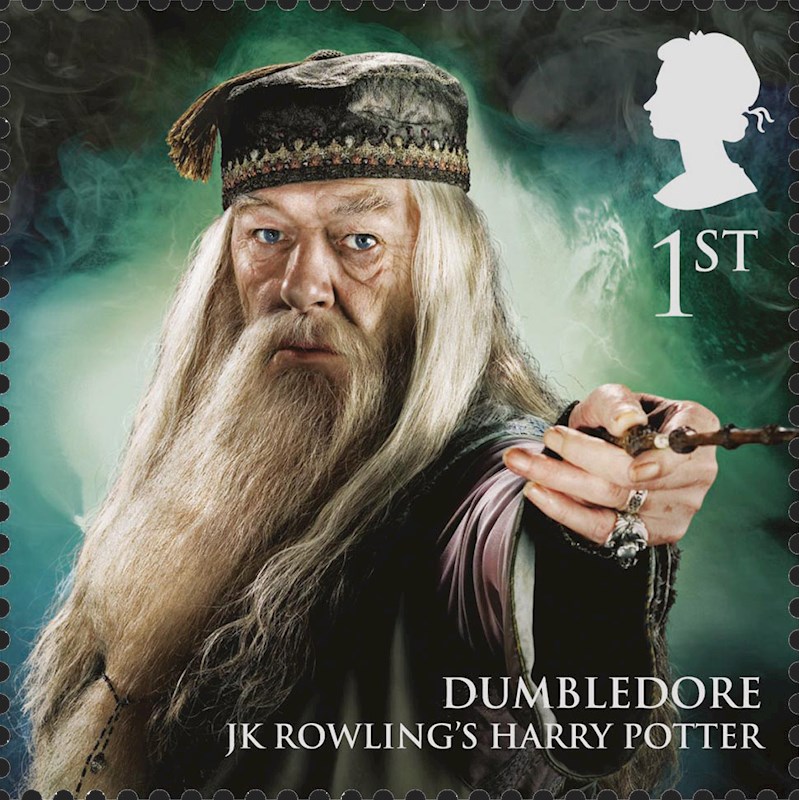 Dumbledore is taking no prisoners in this Harry Potter stamp tribute

No list of popular culture-inspired stamps could fail to include Harry Potter, one of the most critically and commercially successful film franchises of all time. That's partly thanks to author JK Rowling's insistence that the movie be made in Britain, with British actors. This move both ensured the distinctive nature of the novels translated perfectly to the big screen, and kick-started London's nascent VFX industry into the bargain.

Released in 2011, the Royal Mail's Magical Realms series included two gems paying tribute to the series, featuring arch-villain Voldemort and his adversary, Albus Dumbledore (shown above). It's a striking composition, featuring the magical professor in full combat mode against a background of swirling, menacing auras; a reminder that for all the schoolyard hi-jinks, there's also a dark and gritty backbone that lies at the heart of the series' appeal.

07. A Matter of Life and Death 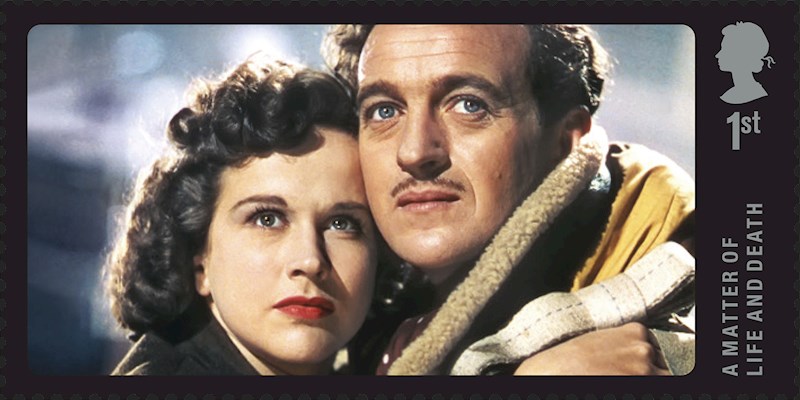 If you’ve never seen the 1946 film A Matter of Life and Death (released in the US as Stairway to Heaven), then do something about it. The fantasy-romance revolves around a mixup in heaven, leading to an airman surviving a crash when he was actually meant to die. In a similar way to It’s a Wonderful Life, it had an emotional and powerful effect at the time on audiences, who were all coping with losing loved ones in the war. More recently, it was picked by Total Film as the second greatest British film ever made (in case you're wondering, Get Carter was number one).

This stamp was created as part of the Royal Mail’s Great British Film series, released in May 2014, and features Kim Hunter and David Niven, enclosed in a simple black rectangle. It's an elegantly minimal design that perfectly encapsulates the classic, iconic nature of its subject. You can check out the full series here. 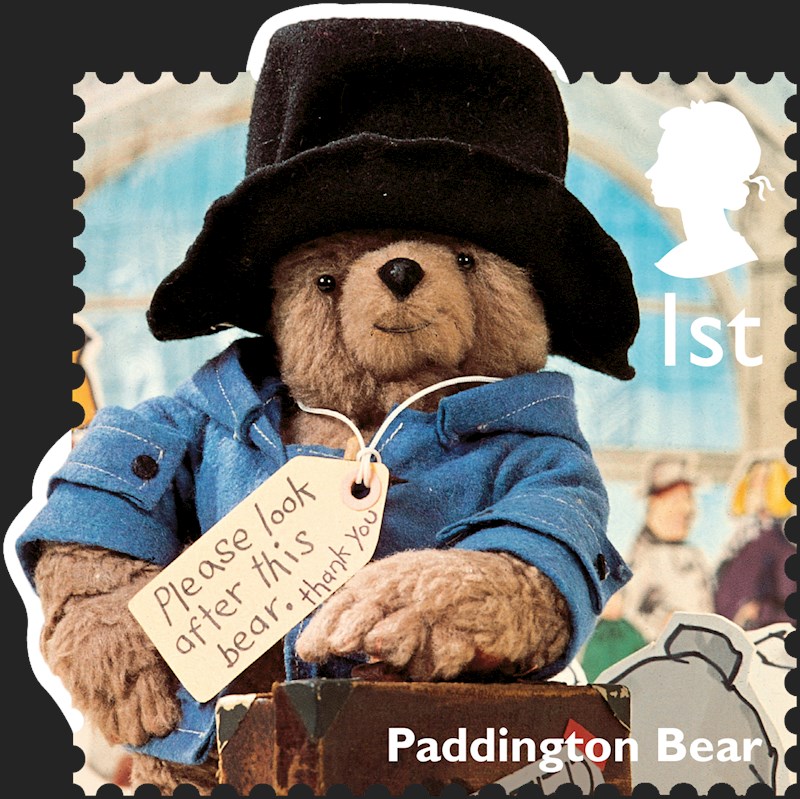 This stamp shows the story of Paddington in a nutshell

It may have taken a while to come to the big screen, in the form of 2014 film Paddington and the 2017 sequel Paddington 2. But the bear from Darkest Peru with a taste for marmalade has been a hit with kids for decades via the Michael Bond books, first published in 1958, and the spin-off TV series created by London-based animation company FilmFair in 1975.

The latter entranced youngsters with its unusual visual approach, combining a 3D stop-motion puppet of Paddington with minimal 2D drawings of backgrounds and other characters. (In one memorable scene, the bear’s adopted parent Mr Brown hands him a jar of marmalade that becomes 3D when Paddington touches it.)

In January 2014, the Royal Mail paid tribute to Paddington with this stamp design, part of its range of Classic Children’s TV stamps, and all the essential elements are there. The 2D background of Paddington station, the ‘Please look after this bear’ label, and the bear himself, striking a characteristically jaunty pose, tell you everything you need to know. We particularly like the playful ‘cut out and keep’ element where Paddington’s head and elbow break out of the traditional rectangle of the postage stamp; very children’s TV. You can see the full range of children’s TV stamps here.

Another of Britain’s biggest children’s TV exports, Thomas the Tank Engine is a fictional steam locomotive who first appeared in The Railway Series books, which were created by the Reverend Wilbert Awdry. Thomas is based on a toy train he made for his son, Christopher.

On TV since 1979, the show has become an award-winning hit around the world, and narrators have included everyone from Beatles drummer Ringo Starr to controversial American stand-up George Carlin. In June 2011, the Royal Mail marked the 100th anniversary of the Reverend Albry with a special series of stamps. Six featured images from the TV series, Thomas and Friends, and four others featured illustrations from The Railway Series books.

Our favourite, shown above, uses a 'widescreen' format to bring forth a cinematic feel; perfectly evoking the jaw-dropping wonder of a railway as it appears in the mind of a child. We also like the cheeky way Thomas seems to be giving the eye to the Queen. You can see the full collection here. 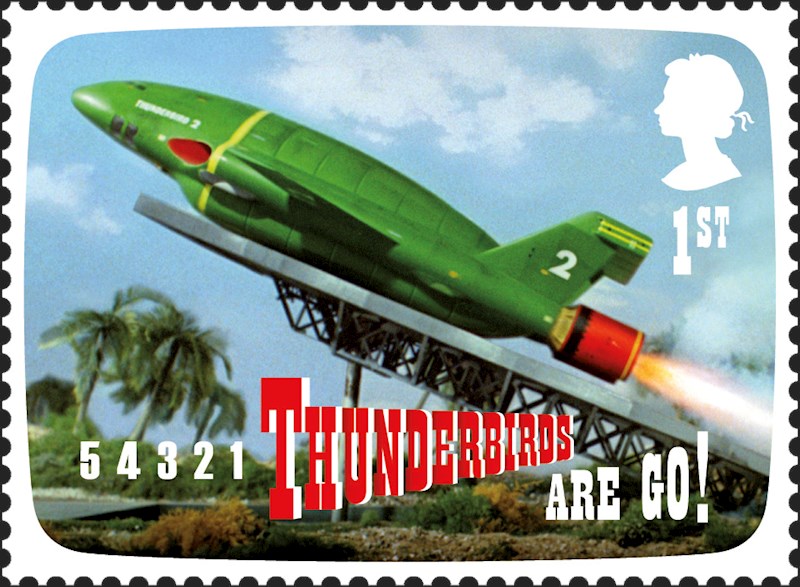 Created by Gerry and Sylvia Anderson between 1964 and 1966, Thunderbirds was a children’s sci-fi series that combined marionette puppetry with scale model special effects. Broadcast in more than 60 countries around the world, it had such an influence on successive generations of youngsters that it has since returned in a number of formats, including a 2004 live-action movie and a 2015 computer animation.

The Andersons created a lot of other hit shows too, including Stingray, Captain Scarlett and Joe 90. But nothing will be more nostalgia-inducing for a certain age-demographic than the classic countdown: “5-4-3-2-1 Thunderbirds are go!”. And so it’s to the credit of the Royal Mail that their stamp tribute focuses not on a particular character but that iconic sequence. You can see the full range of Anderson stamps here.