It's a funny old time in British politics. If you've not been keeping up with the latest developments (and we can't blame you if you haven't), the Conservatives recently hit out at Labour leader Jeremy Corbyn with a KFC branding-themed stunt. Now it's Labour's turn to strike back, and they've done so via the medium of website error pages.

If you've already checked out our list of the best 404 pages, you'll know that they're a great way to inject a bit of humour into a website. And the Labour party has used its website's error page to make a pointed joke about the Conservative Prime Minister, Boris Johnson.

When you head over to the Labour site's 404 page, you'll see the familiar 'Oops! Page not found' message used in one form or another by plenty of online platforms. But underneath there's the catty message "Just like the Prime Minister, this page appears to be missing." Ouch. 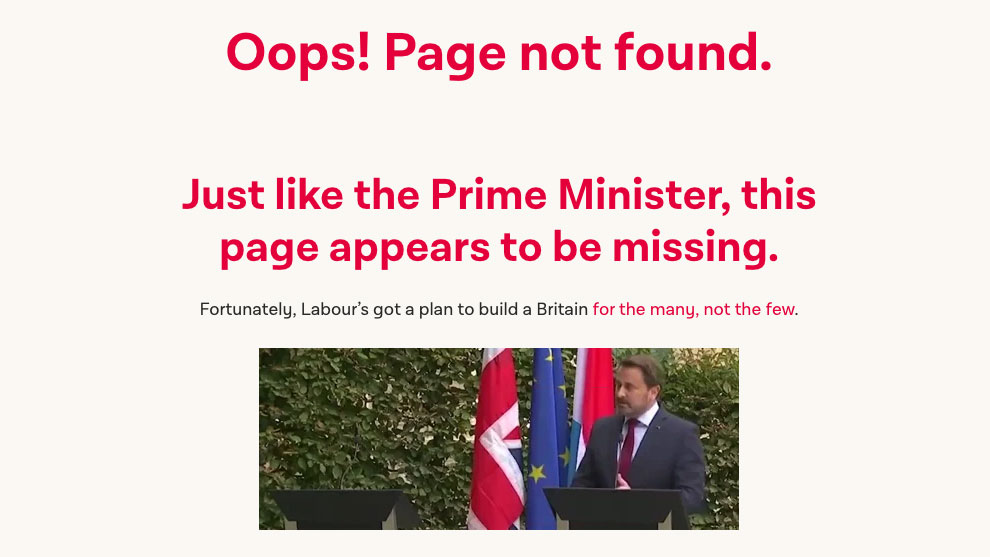 This is in reference to a recent event in Luxembourg City, where Johnson failed to take to his podium at a press conference amid booing protestors. Luxembourg's Prime Minister, Xavier Bettel, was left to speak for himself and made some pretty cutting remarks about the Conservative leader in the process.

And lo and behold, a GIF of Xavier Bettel gesturing to the empty press conference podium has been inserted on Labour's 404 page; his endlessly looping expression only adding insult to injury.

As far as political burns go, this one is brutal but classy. While the Conservative's Jeremy Corbyn KFC stunt got kind of exhausting with its heavy-handedness, this 404 page is at least useful as it helps redirect visitors to the Labour homepage and the party's manifesto.

How to Build Unique, Beautiful Websites with Tailwind CSS Use Quantity Queries to Make Your CSS Quantity-Aware
Scroll to top