With the right tools you can build pretty much anything for the web including browser-based games and native applications. Many of the newest groundbreaking features run on 3D, and in this post I’ve curated my list of the best 3D JS libraries currently available for web developers.

There is no doubt that Three.js deserves to be at the top of this list. It can be somewhat complex to learn from scratch but it’s also one of the better 3D libraries out there.

It’s managed by a core group and released for free on GitHub. ThreeJS primarily works on canvas elements, SVG elements, and the WebGL library for rendering.

Learning the ropes is a challenge and will require at least mid-level JavaScript knowledge. But you can find the complete setup in the Three.js documentation.

If you’re serious about doing 3D on the web, this library is for you. It’s not the only choice, but it’s probably the most popular choice for a beginner to start building stuff fast. 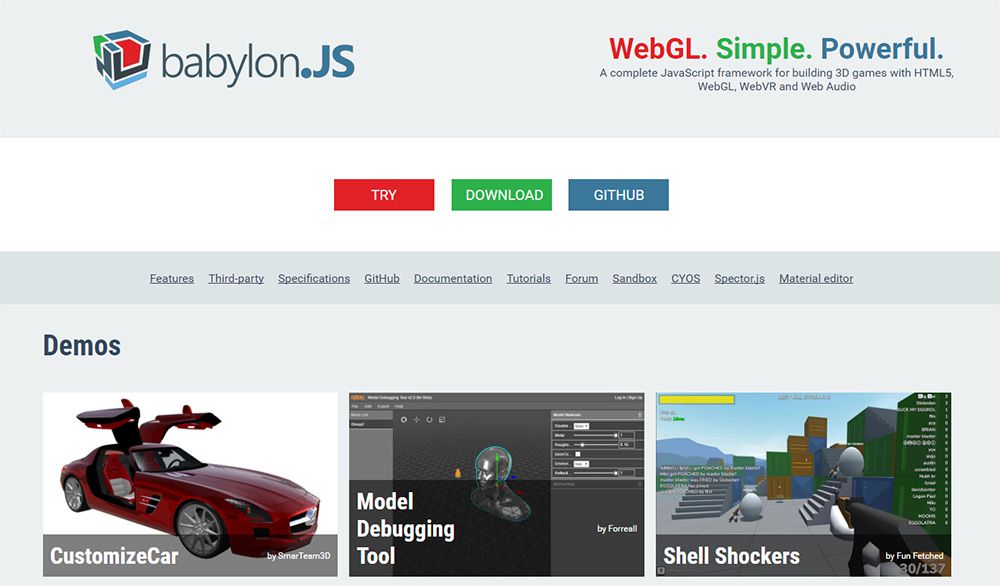 Another powerful library I like is Babylon.js. This one again relies on WebGL and runs solely in JavaScript.

It’s a bit more popular than other libraries but doesn’t have the same reach as Three.js.

Still it’s widely regarded as a powerful choice for web developers who want to create browser-based web games. On the homepage you can find a ton of demo previews and tips on how to get started with 3D game design.

There’s also a bunch of important links to resources like the GitHub repo and the Babylon JS tutorials.

All of those tutorials were designed by the Babylon team, so they’re an excellent place to start learning this library.

For something a little off the beaten path check out Cannon.js. This doesn’t push the usual 3D concepts but instead works as a JavaScript-based physics engine for gaming.

Canon is meant to load fast so you can render elements quickly on the page. It supports most modern browsers and comes with a powerful API for building your own physics ideas off of this.

It works great with Canvas elements and with WebGL apps. The only tricky part is studying the library and getting over the initial learning curve.

Take a peek at the GitHub demos page to see how Cannon.js looks in the browser and why it’s so great. 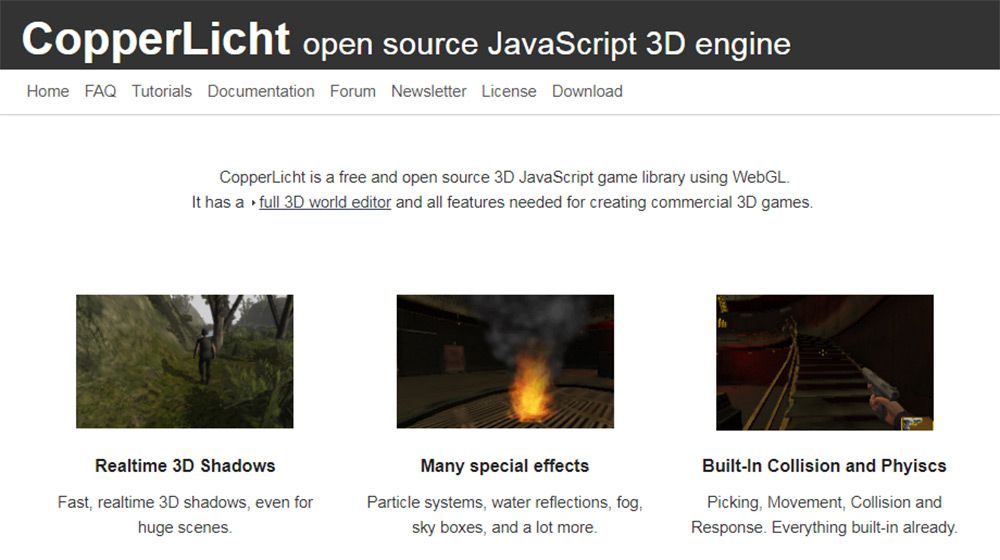 With a name like CopperLicht you might not know what to expect. But this is a powerful 3D JavaScript rendering engine built solely for web-based JS games.

Again it’s 100% open source and free to use for any project. The company that built CopperLicht does have some premium software & tools but these are not necessary for learning the CopperLicht library.

In fact, learning all the features will be tough since it supports an array of 3D functions like shadows/lighting, special effects, and 3D page element interactions.

The tutorials page is the best place to start and if you take this route be willing to take it slowly. There is a steep learning curve to get CopperLicht under your belt, although the payoff is well worth it. 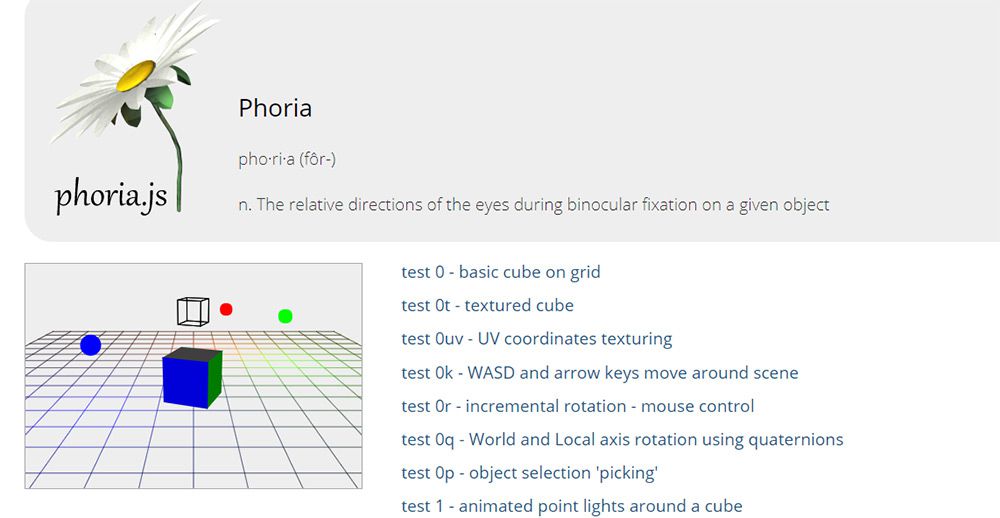 For web-based motion and 3D effects on the screen you might try Phoria.js. It’s really more of a graphics library but Phoria is rooted in 3D rendering inside HTML5 canvas elements.

The main site runs a bunch of demos and it’s a pretty reasonable library for creating 3D graphics. The learning curve isn’t too tough, and you’ll find a bunch of code snippets on the site that you can copy/paste.

Plus it doesn’t even use WebGL, so you don’t need to worry about that library. Although you will need to be comfortable working on the canvas element, but that just comes with practice.

For something that does run on WebGL check out Scene.js. Currently in version 4.2 this massive open source library lets you render elements in 3D for any modern browser.

It’s supported by a large team of developers and has years of major updates making it one of the best 3D rendering scripts you can use. However, this calls itself more of a visualization library, so it’s not just for rendering basic graphics.

Instead this could be used for much more complex tasks like designing multiple views of objects from different angles, or even creating basic 3D game graphics.

The homepage has a bunch of links to great examples if you’re curious to see how this works.

While surfing the web you’ll often find charts and graphs that rely on 3D effects. Many of these run on D3.js which is a powerful JavaScript library for rendering data in 3D.

It’s also a totally free open source project with a very helpful GitHub page. The goal is to use SVG & canvas elements inside HTML to create dynamic data that can animate, rotate, and ultimately display information visually.

Take a look at the wiki entry on the GitHub page for more info. This includes some basic setup details along with documentation for anyone willing to dive into the D3 library.

I don’t see much mention of LightGL.js around the web but it’s an excellent choice for 3D rendering in the browser.

This free open source library runs on the WebGL framework, and it’s meant to be the fastest, lightest library you can use. This works at a lower level than most abstraction libraries so it does require a stronger understanding of JavaScript.

Most developers just want simplicity so that could be why fewer people are sharing it around the water cooler.

But if you’re comfortable working in JavaScript then LightGL will give you a lot more control over your codebase. 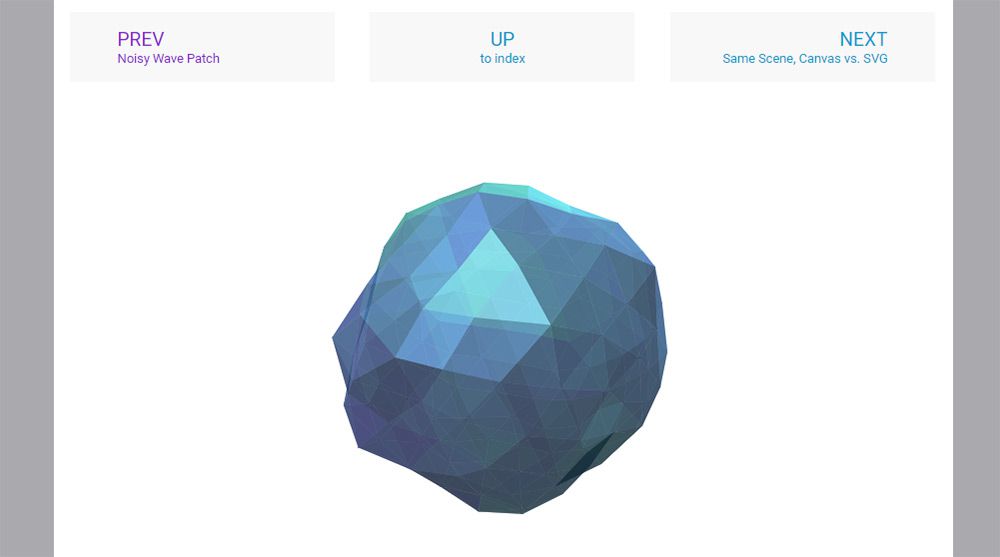 For its complete lack of dependencies I had to include Seen.js in this list. Again this runs on the HTML5 canvas element but it works in vanilla JavaScript without any other required libraries.

It’s totally free for all developers and free to customize under the Apache 2.0 license. Some of the demos are pretty crazy considering they’re built solely in JavaScript.

Anyone who’s willing to push the boundaries of basic 3D visualization might take a look at Seen. It may not have a large following like Three.js but it’s a great canvas/SVG alternative that doesn’t rely heavily on WebGL.

If you are curious to start with WebGL then take a peek at our example gallery of 30 awesome WebGL experiments.