Not only do female employees make significantly less money than their male counterparts, but they are also subject to a ‘pink tax’ on consumer goods. You read that right, female consumers are given less money and then made to pay more. Shaving startup Billie has launched an unexpected marketing campaign that aims to bring extra attention to the issue. Enter blue wine.

The packaging design is nothing to write home about and the drink itself is in a hue more akin to mouthwash than wine (but that's also reminiscent of WKD – a saving grace?), but Château de Blué does make an important statement. It's priced 13 per cent lower than the average bottle of rosé, to represent the difference in the price of a standard razor marketed at women (Billie's own razor subscriptions are actively in line with the male versions).

Billie founder, Georgina Gooley explains how her company wants to counteract these issues: "We wanted a simple, playful way of showing what the Pink Tax is. Not enough women know that they're overpaying for products marketed to them." She says that Billie wants to "raise awareness around this ridiculous pricing discrimination and encourage women to purchase from companies that are fair to them." 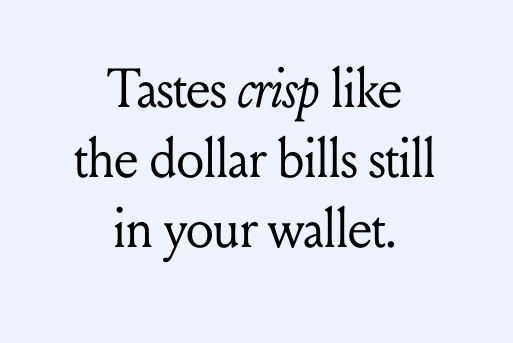 We were concerned that this campaign strategy would come across as a little stomach-churning, but Bille has nailed the tone with lighthearted wit. Taglines describing the wine as a 'robust, full-bodied feast for the senses – including the sense of fairness' and 'contains notes of crushed blueberries, oak, and just a hint of gender bias' make the point with a sense of humour.

People are loving the strategy on Twitter, with April S' thumbs up showing the campaign will definitely be good for business as well as making a great point about equality:

Bille created the wine with KDM Global Partners, a creator of private-label wine based in California – an apt choice of location given California was the first state to ban gendered pricing back in 1995. And given the wine sold out in just eight hours, the message certainly seems to have hit the right note.

Traffic-stopping examples of billboard advertisingAre trends any good for branding?8 brands that rule at social media