Microsoft has just refreshed its range of Windows 10-based Surface devices and sitting at the top of the new models is this – the third generation of the Surface Laptop; Microsoft’s traditional ultraportable clamshell laptop. It doesn’t have a removable screen like its sister devices, but it still boasts a superb touch panel and you can use it with Microsoft’s Surface Pen stylus – as such it has a distinct differentiator versus Apple’s notebook lineup.

Its closest competitor is undoubtedly Apple’s MacBook Air, though as with the specs across Apple’s MacBook Air range, some of the Surface Laptop configurations are similar to what you’d get inside the MacBook Pro. There are more rivals then ever in this space and Dell’s XPS 13 and HP’s Spectre range definitely join Apple and Microsoft’s efforts at the top table. 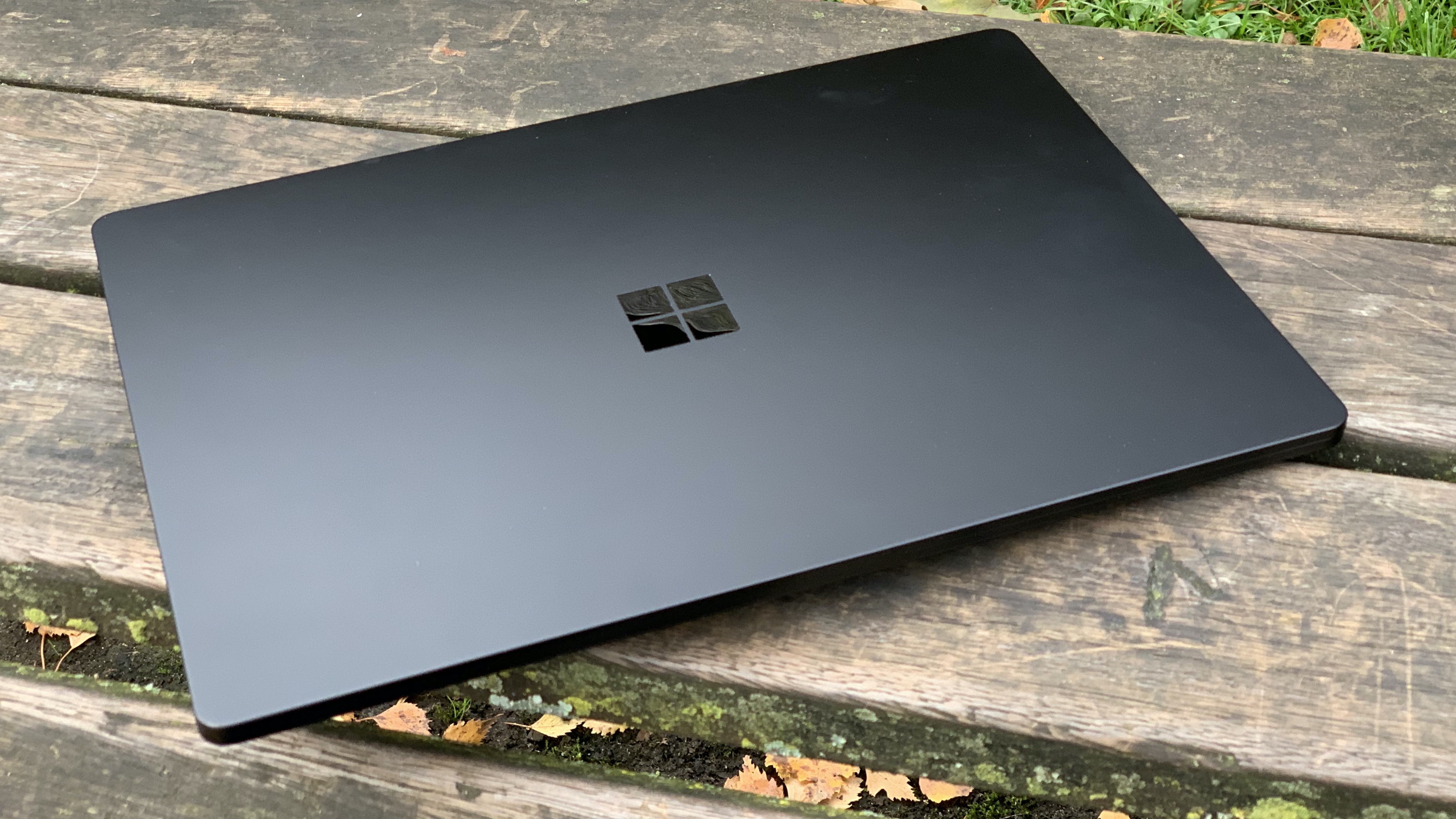 The Surface Laptop 3 – like its predecessor – is available in 13.5 and 15-inch versions, but it’s the smaller model we’re reviewing. Although Microsoft’s Surface devices are available in various colour options, it’s the matt black model we’re looking at here.

The Surface Laptop 3 is a premium device and is priced accordingly. It sits above the Surface Pro in Microsoft’s range but underneath the Surface Book 2 with its detachable tablet display (where the whole screen comes off and can be used as an independent tablet). Our Core i5-based, 8GB RAM and 256GB SSD review model (£1,269) sits above the base level with its brushed black metal finish.

The cheaper (£999) version uses Alcantara fabric around the keyboard and has a 128GB SSD instead. Further up the lineup you can upgrade to a Core i7 processor with 16GB RAM (£1,389), and you can also choose to upgrade the 256GB drive to 512GB (£1,679) or 1TB (£2,114). It doesn’t take a genius to deduce that the lower priced models represent decent value, but things start to get rather expensive further up the tree and you’re paying a lot for factory-fitted storage. 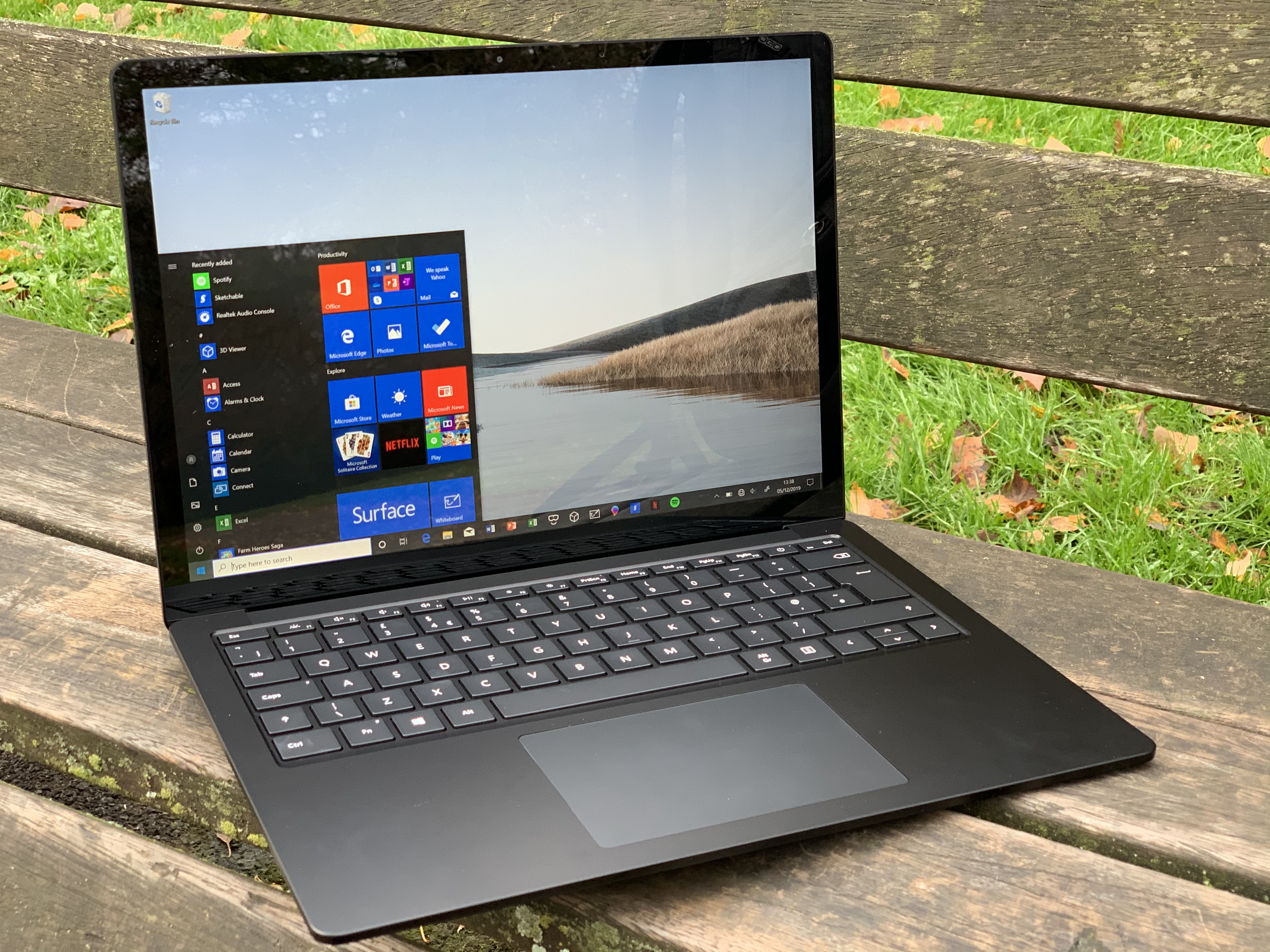 Again you also need to pay £99 if you want to add the Surface Pen accessory but unlike with Surface Pro devices (which don’t have a trackpad) it feels less essential. You’ll probably want to  get one to complete the experience, though.

In use, the Surface Laptop 3 always feels nible and quick – you’re certainly never left waiting for anything to happen. One of the advantages in buying the Surface Laptop is that you know it comes loaded with the very latest hardware under the hood. Both processor choices inside the 13-inch are from the latest 10th generation series of Intel Core processors – the 1.2Ghz Core i5-1035G7 used here and the upgrade option, which is the 1.3GHz Core i7-1065G7. Both are quad core chips, launched in late 2019. In Geekbench 4 and CInebench benchmarks, the Surface Laptop 3 comes out favourably thanks to its new processors – comfortably beating the MacBook Air and previous Surface Laptop 2. 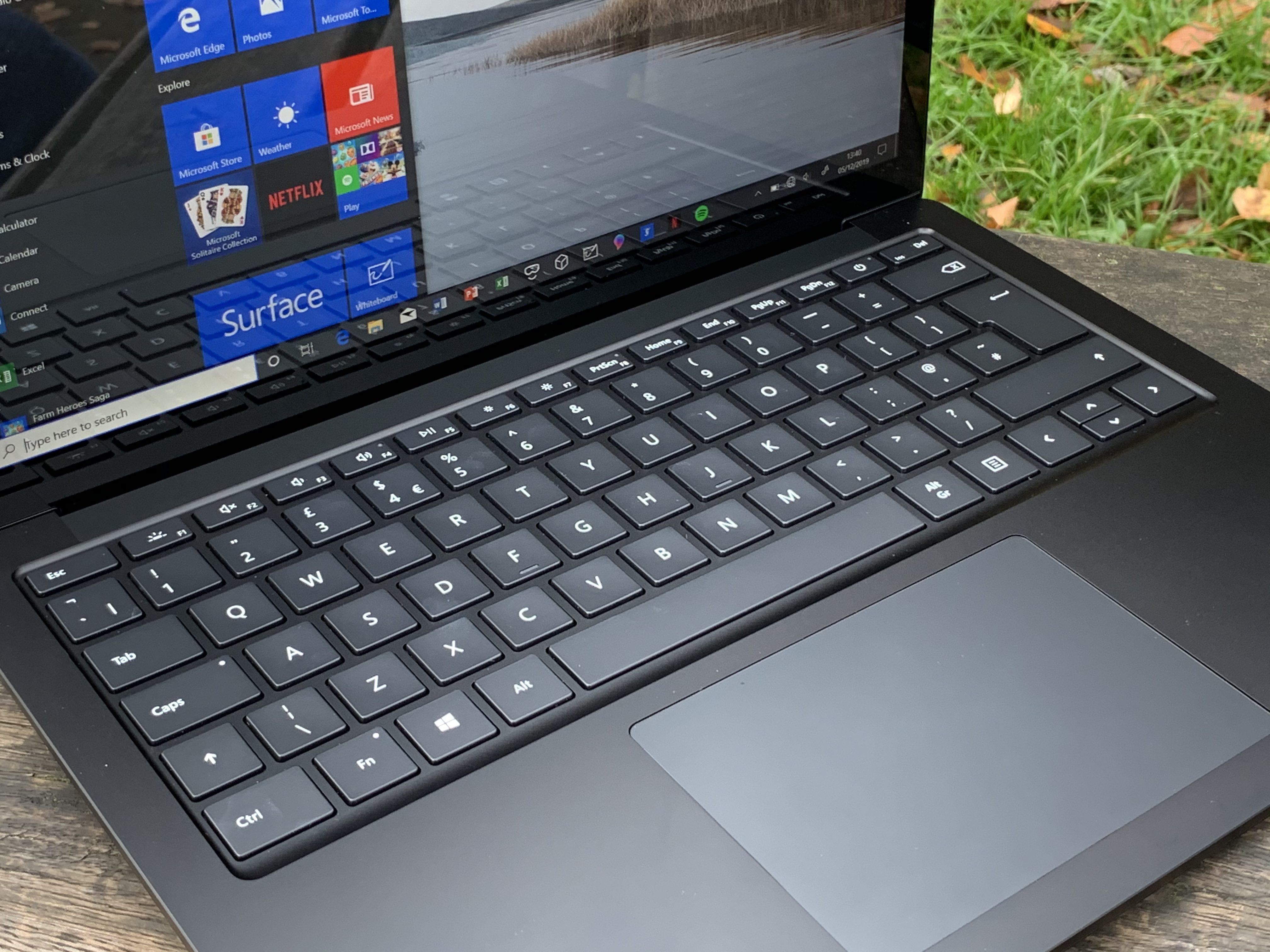 However, the increased performance does mean a little hit on battery life– we got around 8 to 9 hours in general use and that’s a touch under last year’s model and the Dell XPS 13, though it’s not that much to worry about (there’s also fast charging with this new model, too, so you can get it to 80 percent in an hour). It’s worth noting that if longevity is your wish, the MacBook Air has low power processors and will last significantly longer. The MacBook Pro is probably a better comparison in this instance and, again, you’ll get 8 to 9 hours out of that,.

The 13.5-inch model has some disadvantages versus both the 15-inch model and some rival laptops in that it doesn’t have an option for dedicated graphics, instead sticking with Intel’s Iris Plus graphics. The 15-inch models boast AMD Radeon Vega or RX Vega graphics running alongside Ryzen 5 and Ryzen 7 processors. 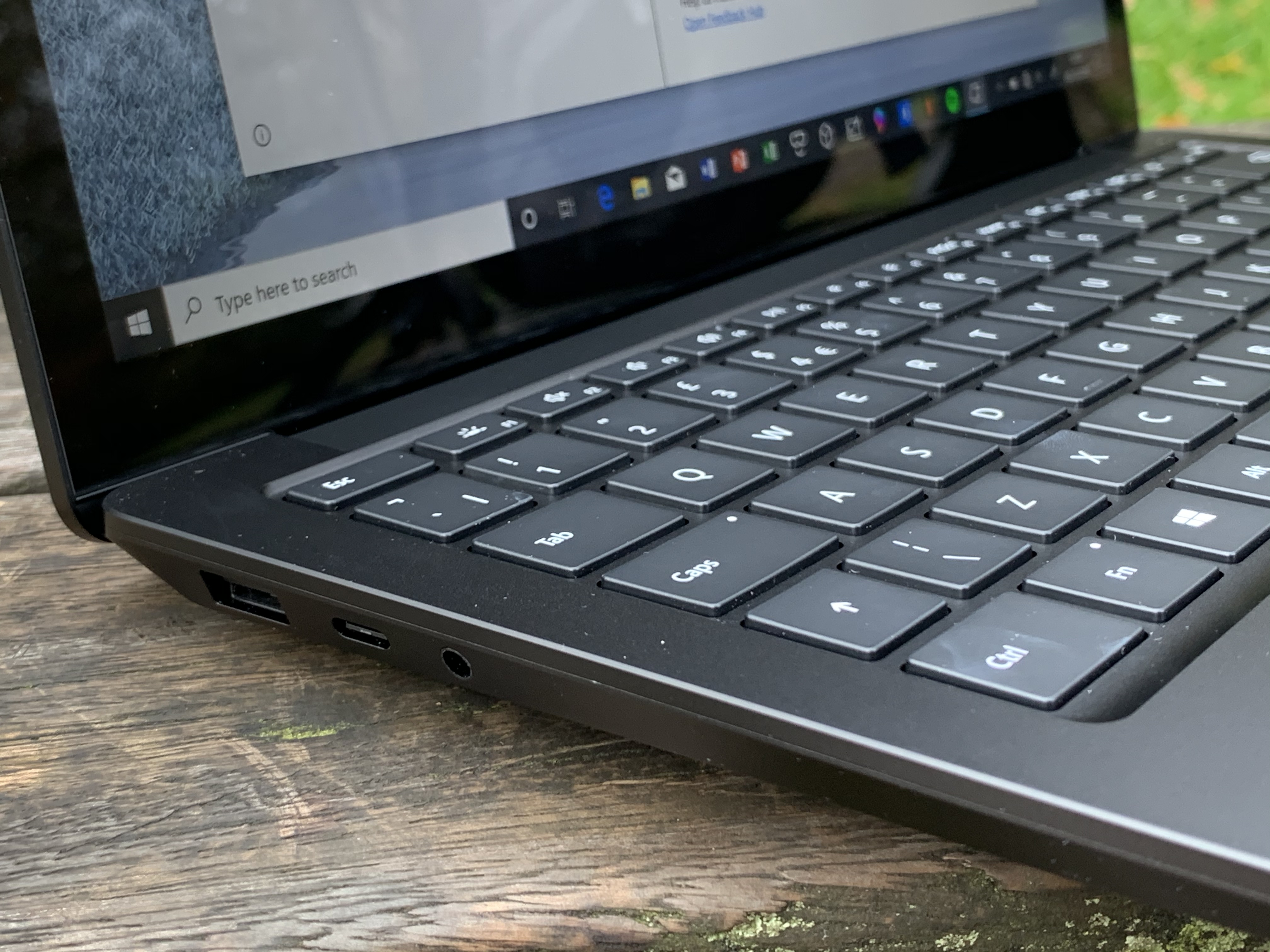 To be fair, that’s a similar situation on the MacBook Pro, where the 13-inch relies on Intel graphics with AMD Radeon Pro only available on the newer 16-inch (alongside Intel processors, though). Intel’s on board graphics are extremely capable these days, but you’re still going to want something with a bit more poke if you’re using it for intensive graphics or video work. As such, the Surface Laptop 3 isn’t a complete do-anything machine like the new 16-inch MacBook Pro or the more powerful versions of the Surface Book 2, but it’s not far off.

The 13.5-inch PixelSense display is unchanged from the previous two generations. This is a bit of a growing trend in the laptop space and clearly manufacturers feel boundary-pushing isn’t necessary at present. Remember that brighter and more pixel dense displays always have a hit on battery life, so it’s probably a compromise not willing to be made by consumers. 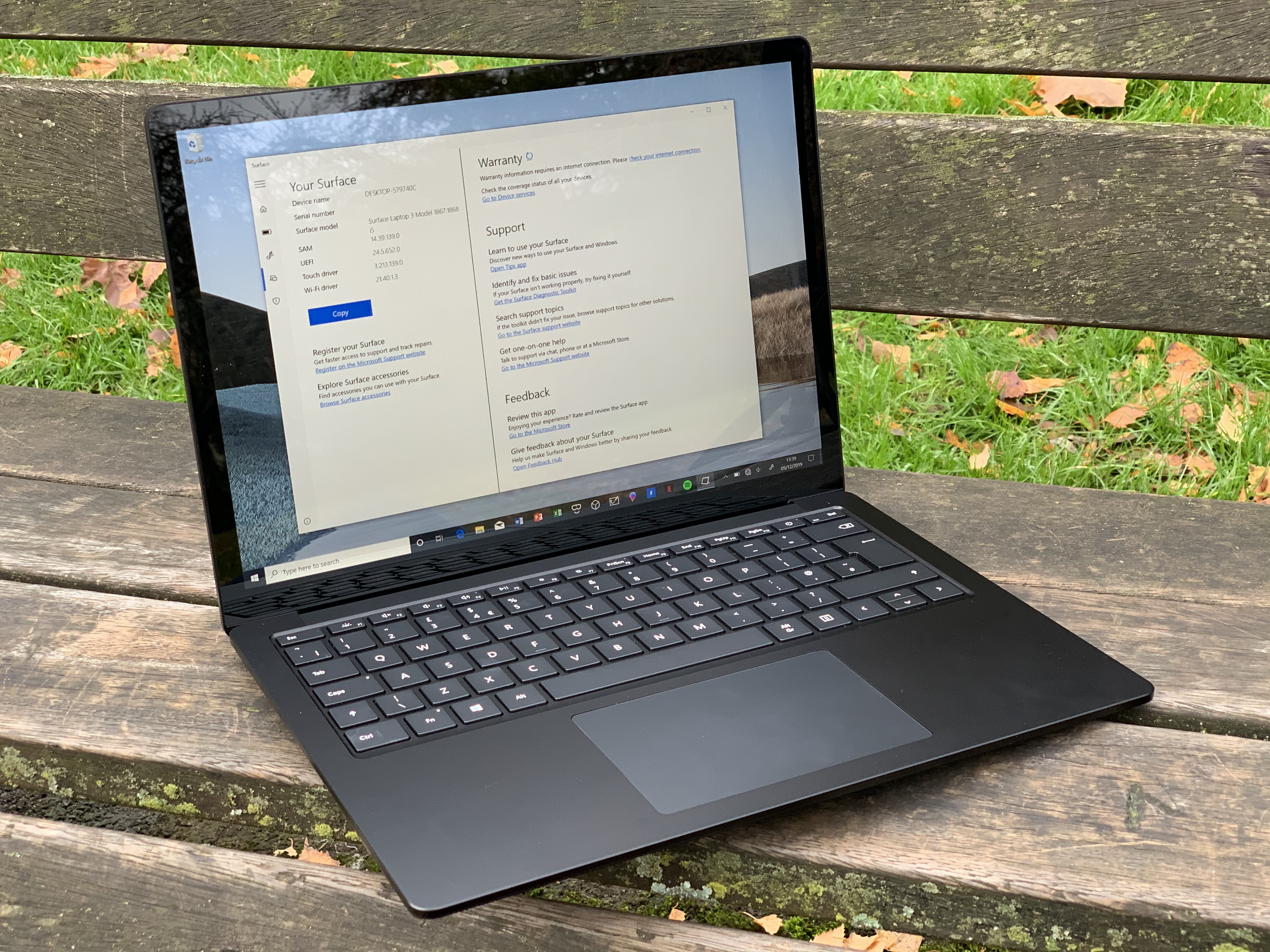 The good news is that the 13.5-inch PixelSense display is still absolutely superb with a 2,256×1,504 resolution which works out at 201ppi. The one disadvantage of this display compared to some rivals such as the HP Spectre x360 is that it does not fold flat and that’s a little bit of a disadvantage for creatives. Microsoft would obviously argue that with the Surface Pro and Surface Book it offers other options for that market.

So what else is new with this version of the Surface Laptop? One of the headline features is undoubtedly that Microsoft has joined rivals in including USB-C as a key method of connectivity on its latest Surface devices instead of Mini DisplayPort. However, it has decided to stick with its proprietary Surface Connect standard for charging.

This is unnecessary and by having Surface Connect on board alongside a solitary USB-C and one USB-A port, it shows that Microsoft is hedging its bets rather than having the conviction of rivals to move to USB-C for power, data and video. Worse still is the fact that the USB-C ports included don’t include compatibility with Thunderbolt 3; that’s a big miss for those who need to speedily access large amounts of data. 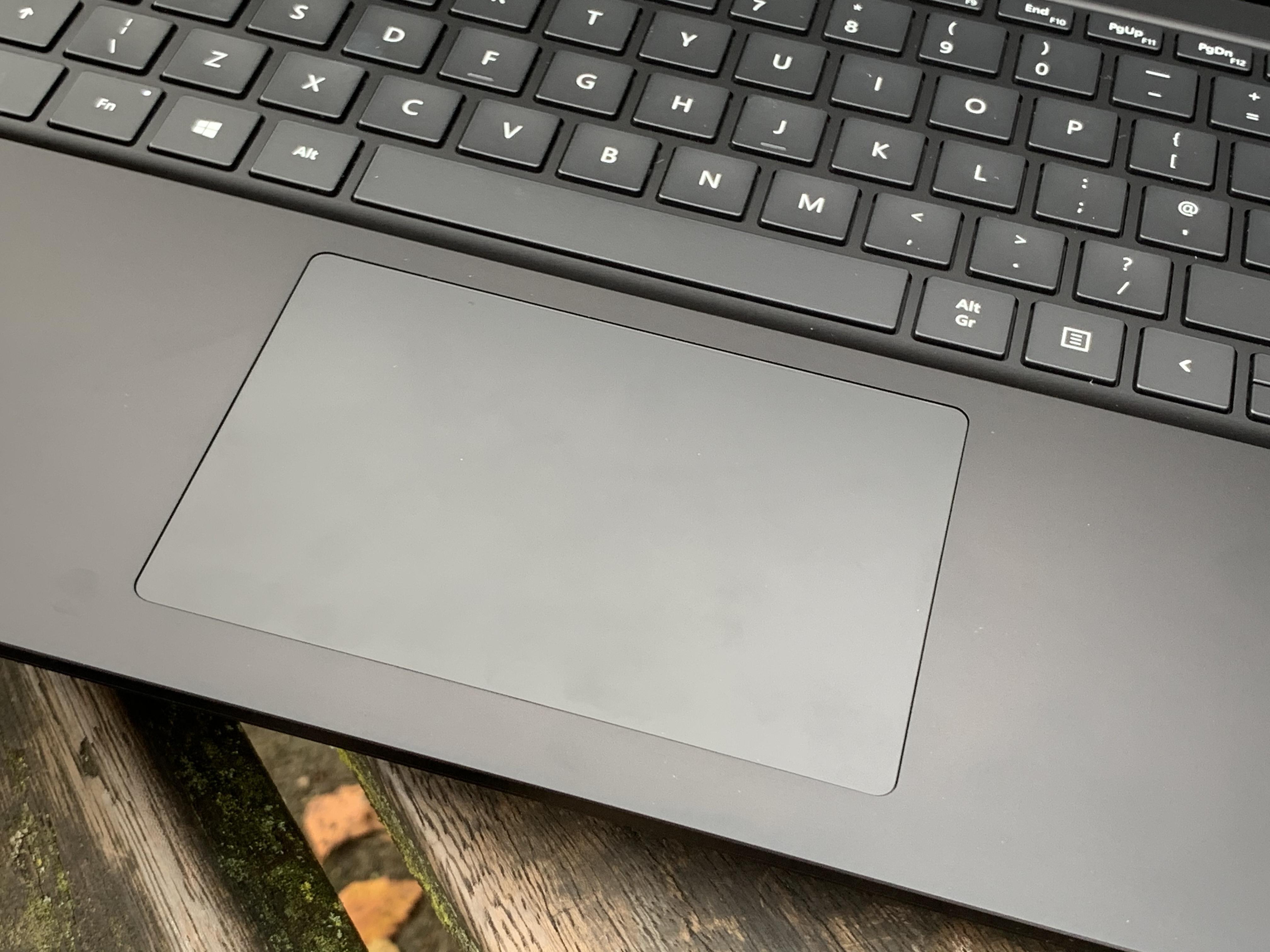 The trackpad has also been improved this time – it’s now 20 percent bigger than it was (not that it was small previously) – while Surface keyboards remain some of the best around. There’s also compatibility with the new Wi-Fi 6 standard, too. And yes, you get a headphone jack.

Microsoft Surface Laptop 3: Should you buy it?

The headline is that one of the best ultraportable laptops on the market just got better. There are still a couple of niggles – like the lack of Thunderbolt 3 support – but broadly the picture painted by the Surface Laptop 3 is a rosy one.

It feels great to use and beats the MacBook Air on performance. However, it isn’t the cheapest as you move up the model lineup. And it will only appeal to a subset of the creative market, too – because it doesn't have the option to take things a step further with the graphics, its not an option when you compare it to the higher end versions of  the Surface Book 2 and MacBook Pro series.

In a way, plumping for a Surface Laptop means you're prioritising portability. That may be no bad thing if, say, you've got another machine that you can use as your main creative tool. Certainly, video editors will need to look elsewhere.

But, as an ultraportable, there are few better on the market and there's not a lot to choose between this, the MacBook Air and another of our favourites, the Dell XPS 13.