Ross Tran steps out of his Californian apartment. The sun shines in the sky above and a car idles on the road below. Holding a couple of large canvases, he climbs over a balcony, shimmies down a tree and speaks to camera: “Welcome to another episode of Ross Draws. It’s my graduation episode!”

He runs to the waiting car. Animated sparks fly. He throws his artwork through the open window, jumps into the driver’s seat and speeds away. The hand-written personalised number plate taped to the back of his Chevy reads: COLOR DODGE.

In just 20 seconds, we see why the 23-year-old artist’s videos have earned nearly two million views on his YouTube channel: the quick cuts, the playful tone, the breathless, almost hyperactive presenting style; whistle-stop tours of his art school, apartment and various locations around California; interviews with the smiley, unbelievably healthy-looking friends and teachers who populate those places…

And, of course, the thing that underpins the channel’s success, Tran's art – bright, stylised, painterly, with tutorials explaining how to paint his work. What you’d never know by watching these videos is that the channel “came from a dark place.” 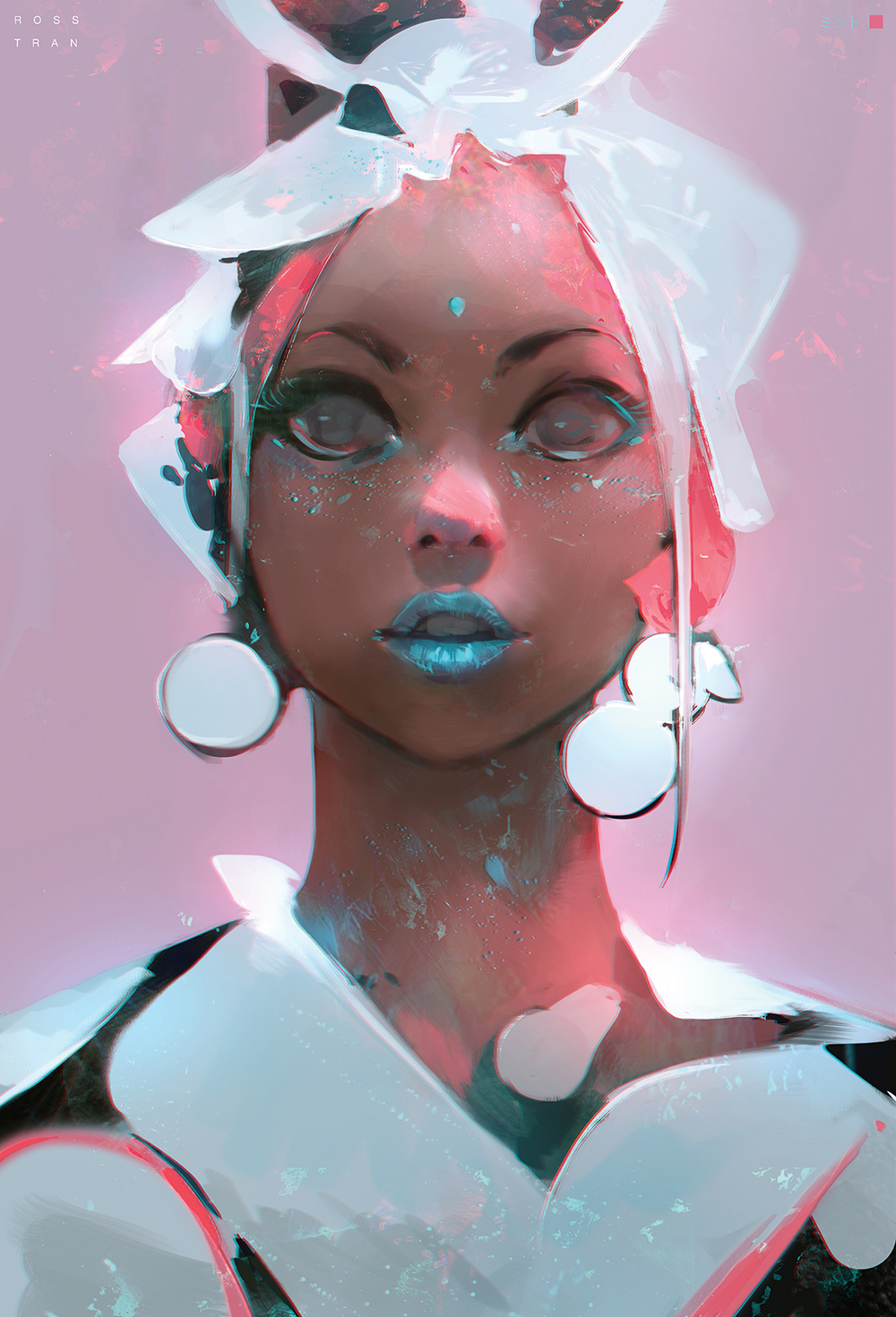 “A piece from my Astro Series. It’s a collection of portraits involving some kind of white garment and shapes as the influence.”
Personality is key

Tran is a recent graduate of Pasadena’s ArtCenter College of Design. He won his first concept artist job at the nearby West Studio when he was just 17. A couple of years later, he worked as lead character designer on his first feature film – creating Echo for the 2014 animated movie Earth to Echo. He now counts among his clients Disney, Samsung and Microsoft, and has since worked on the upcoming Halo Franchise and several more films.

How did he win so many big jobs at such a young age? “You have to personalise your portfolio so it represents what you really want to do,” he says. “For instance, if you love character design and want to get hired for it, make your portfolio and online presence character-based. I’ve seen a lot of people put too many types of work in their portfolio. It makes them look disposable. The last thing you want to be is a robot. Show the world who you are and what you want to do.” 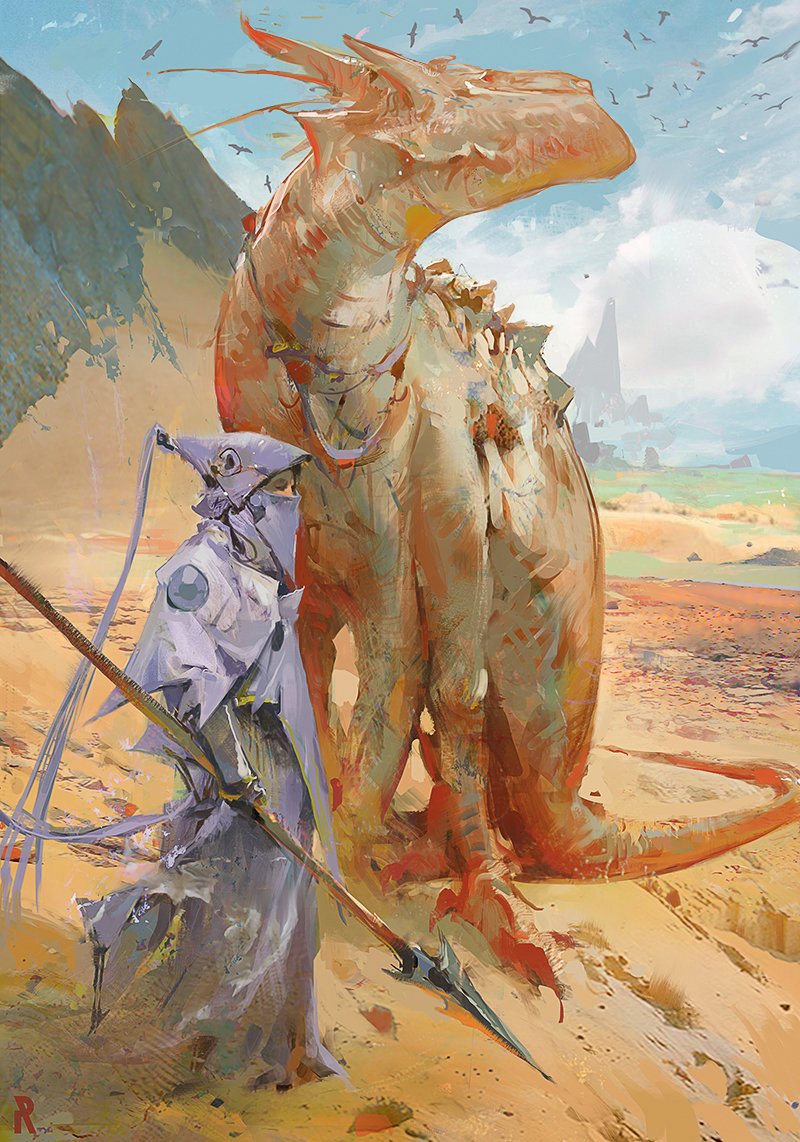 “This was one of the few pieces I did in my year off art to pursue acting. I just loved to paint and felt the need to express myself artistically.”

He says some people may be familiar with his earlier work, but most of this success has come through Ross Draws, the YouTube channel that he started at the end of 2011.

“I actually grew up really shy,” he says, an image very different from the boisterous character he presents in his videos. “I had a lot of insecurities growing up. I think Ross Draws represents a side of myself that depicts transformation and self-growth. I consider myself an introvert, but one who’s learning extroverted skills.” 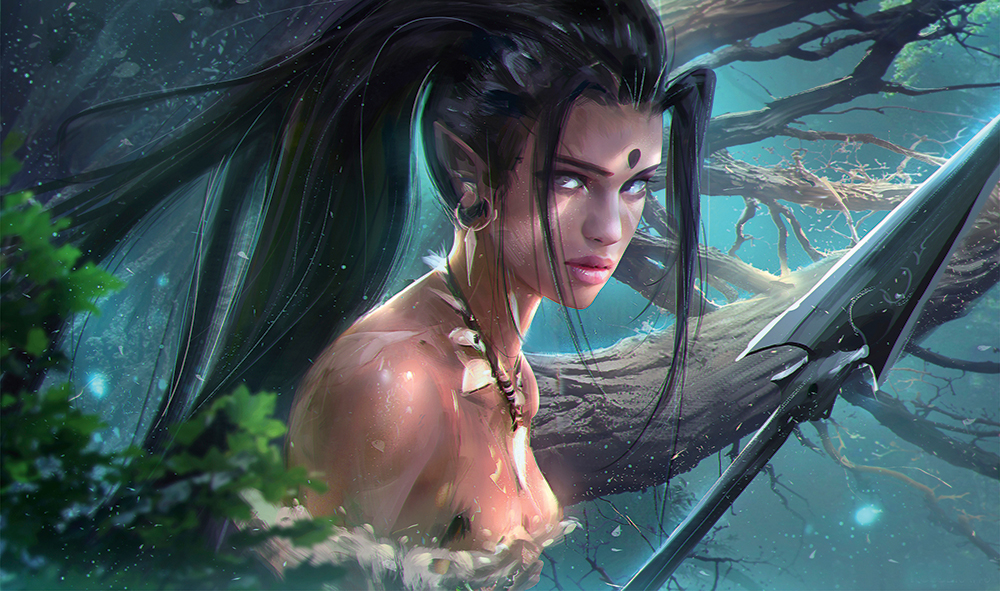 “This was from the third episode on my YouTube channel, drawing Nidalee from League. She’s one of my favourite characters and I had to draw her!”

Even after earning a place at the prestigious ArtCenter College of Design, Tran says he felt something was missing in his life. He was passionate about art, but also loved making people laugh. So he took a year off and pursued an acting career.

Tran juggled art school and auditions. He took extra classes in improv and scene study. The nearest he got to a big break was an audition for a pilot on the Fox network. 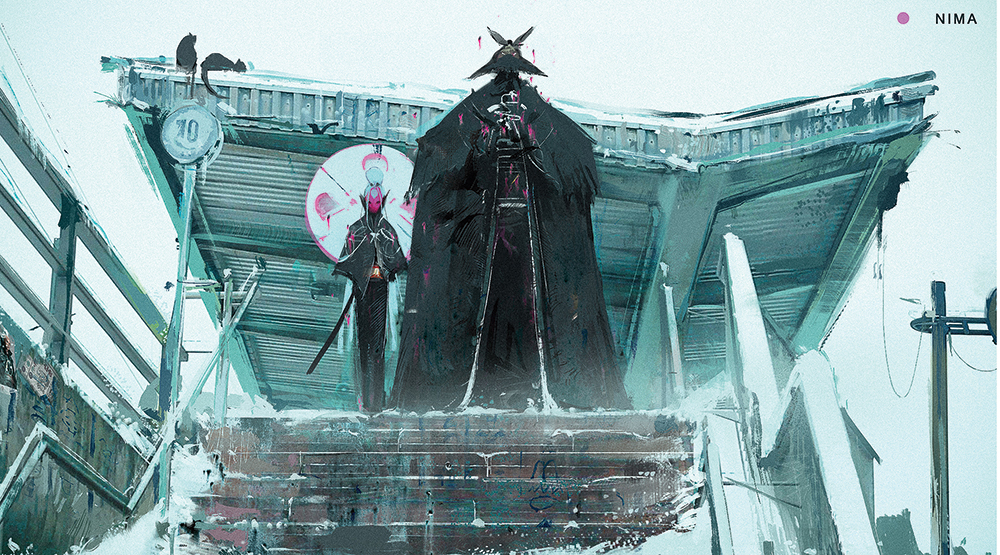 “My work has recently taken a more stylised, graphic approach, while still pertaining to my painterly roots.”

The small part called for a designer who freaks out a lot. “My perfect role!” Tran says. The producers of hit shows Psych and Scrubs were in the audition room and he made them laugh. They gave the part – which the script labelled “Asian Best Friend” – to a white person.

“I’m not sure the pilot even got picked up,” he says. “But it was a great experience. I also auditioned for a lot of commercials.” 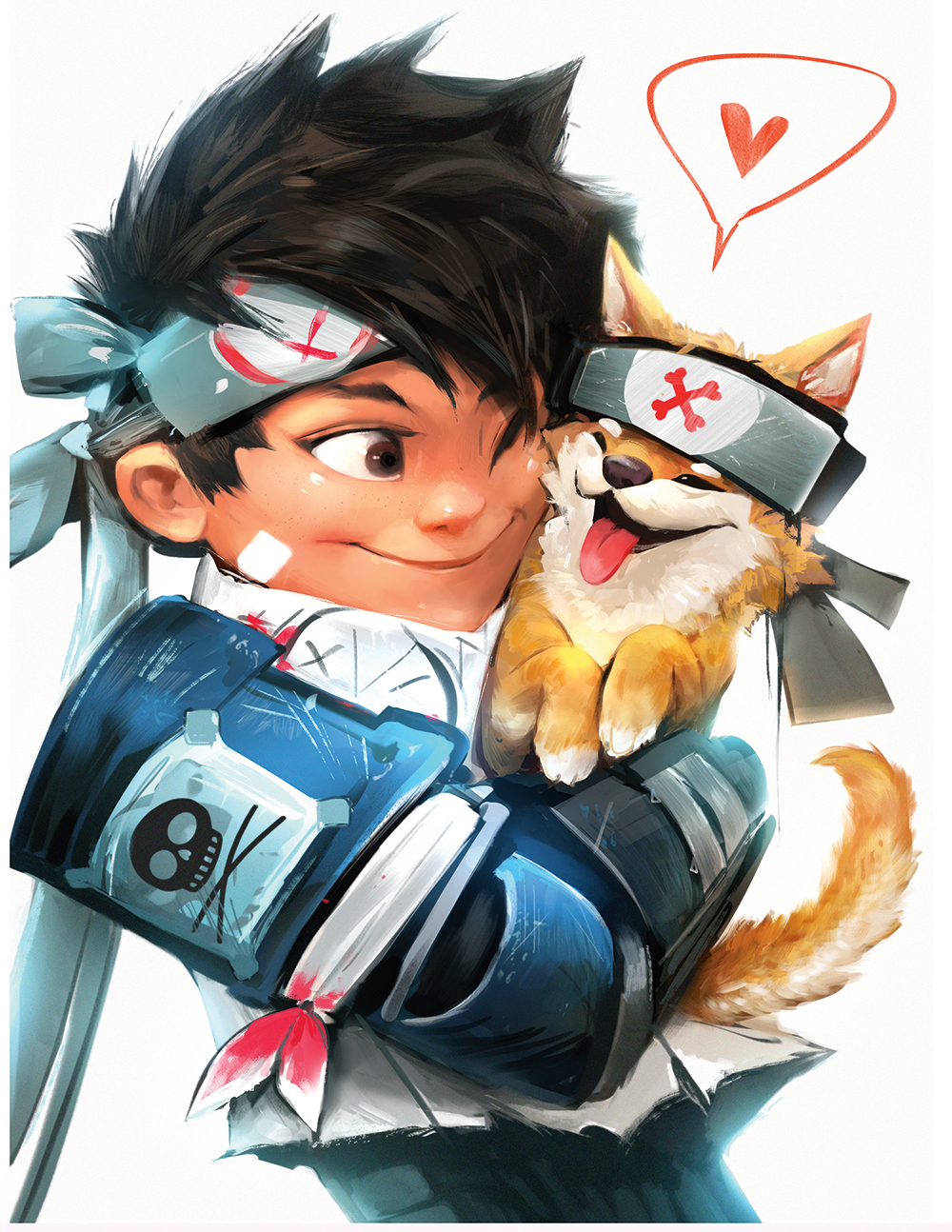 “I always got tons of requests to draw my dog and found a perfect opportunity – to celebrate one year on YouTube.”
How to draw and paint – 95 pro tips and tutorials
Branching out on YouTube 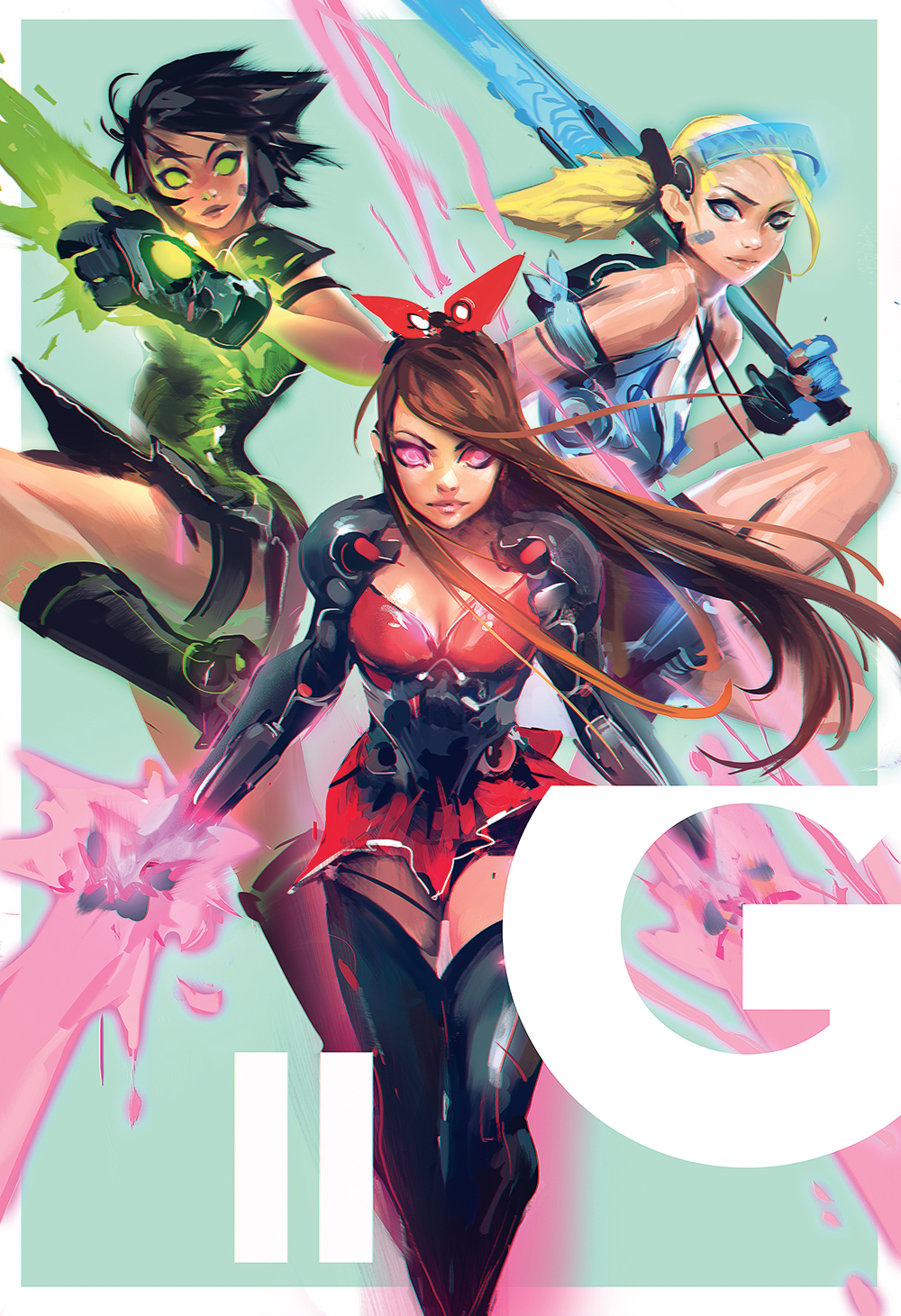 “I grew up watching The PowerPuff Girls and wanted to do my take on it. I was bringing my love of graphics in the piece.”

A friend suggested he start a YouTube channel combining the two things: art and making people laugh. “I hesitated, thinking it wasn’t really my thing. Prior to the channel, I felt like I had no purpose. I was waking up and feeling really unmotivated to do anything. Uninspired, unwilling, defeated.

“Acting helped me to commit. Because, in acting, you have to commit 110 per cent or else no one will believe you, not even you. You can’t be in your head. Going on those auditions and to classes helped me to commit to the moment and just do it, no thinking. It’s a practice I’ve also taken into my art. If you have an idea, don’t be afraid to voice it.” 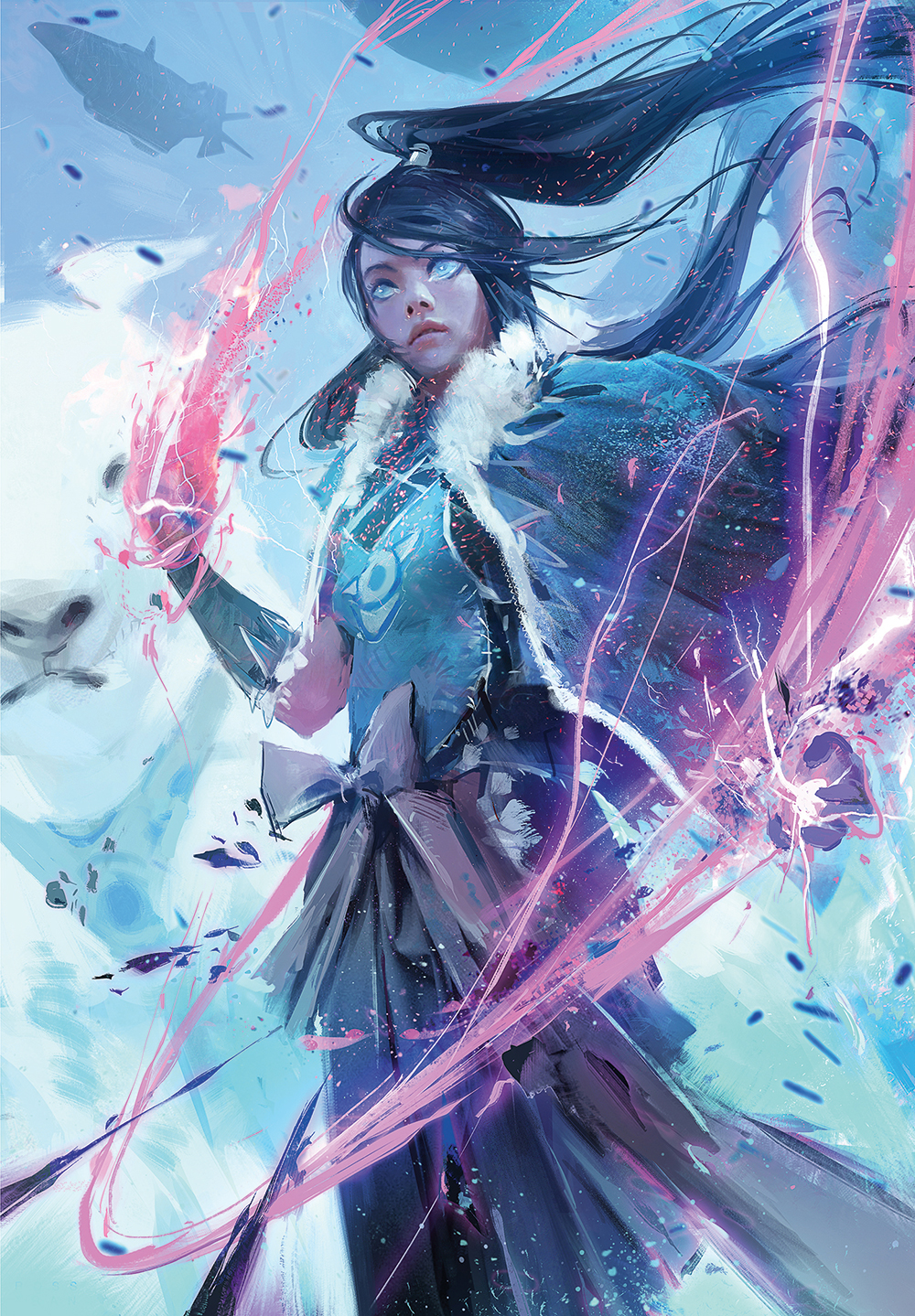 “This piece is quite special to me. People often mention that this was one of the first episodes/pieces they saw when they discovered me.”

When Tran reinvented himself as Ross Draws, it shook up his personal life and kickstarted his career. But the success of the YouTube channel brought new problems. “My schedule is different every week, every day,” he says. “Sometimes I feel I overload myself. I’m definitely what they call a night owl. I go to sleep anywhere from 2 to 5am. As my channel grows, so do my opportunities – conventions, signings, gigs – and it’s been harder to have a set schedule. It’s still currently a learning curve. But most of my week consists of editing my videos and painting.”

Growing up, Tran was into TV shows like Pokemon, Sailor Moon and Power Rangers – you can see those influences in his art and on his channel. He has a few key rules when making videos. Our attention span is getting shorter and shorter, he says, so he keeps footage under the six-minute mark. It’s also important to be yourself, connect with your audience and collaborate with other people. He’s made videos with artists he looks up to, like Dan LuVisi and Anthony Jones, but also collaborations with non-artists, such as Jimmy Wong and Yoshi Sudarso, who plays the Blue Ranger on the new Power Rangers show. 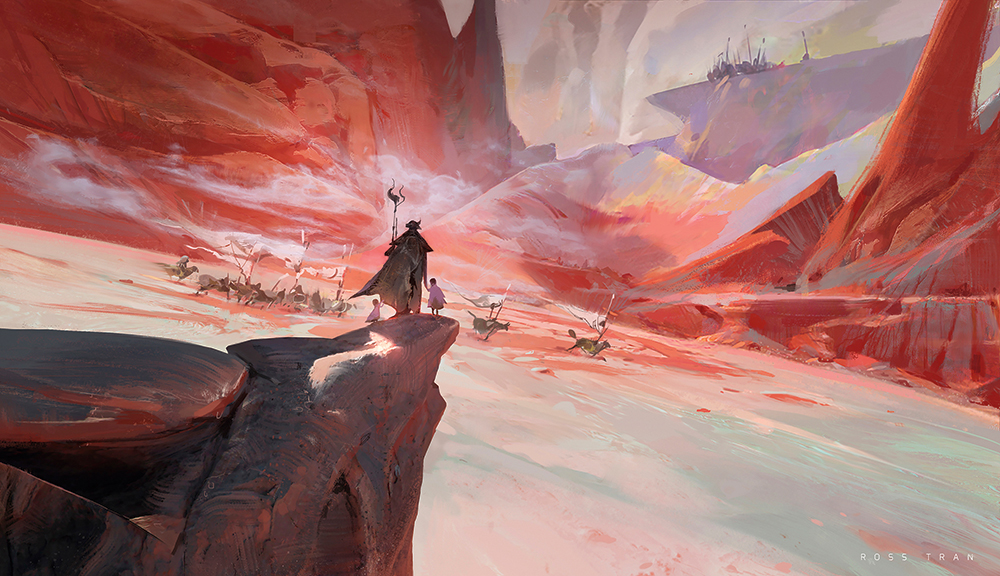 “This was another one that sat in my folder for about two years. I never knew how to finish it, but one day I opened it up and let the story breathe.”

The YouTube channel brought Tran new confidence, which was mirrored in his art. When he started at ArtCenter College of Design, he knew he was a capable painter but felt his work was too heavily influenced by his favourite artists. Then he painted a piece called Journey – a landmark in which he found his own voice and techniques.

Tran works with Premiere and After Effects for his videos, Photoshop and Lightroom for painting. Using all Adobe software helps him easily switch between apps. One website recently labelled him the “Master of Color Dodge.” The blend mode creates extra depth and makes colours really pop off the screen, an almost glowing effect that’s present in much of Tran's work. 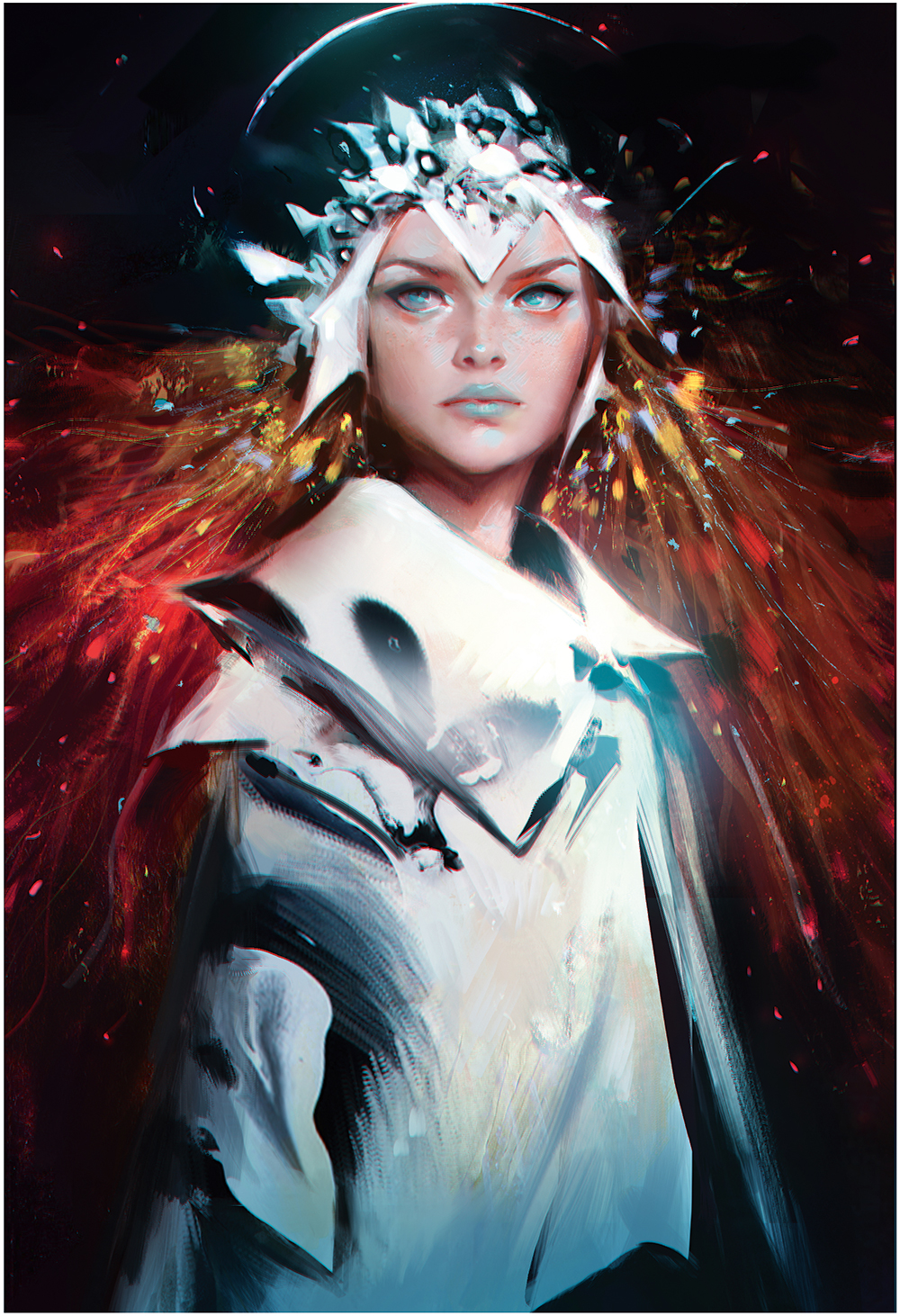 “This has been sitting in my WIP folder for about three years. A lot of my pieces sit there until I can see the piece turn into something unique to me.”
It's not cheating

Tran hadn’t always used such techniques. “At a young age, I thought that using certain methods as cheating, only to realise now that it doesn’t matter. You can learn from anything, any method, anywhere. Have an open mind and you can absorb information easier and faster.”

After graduating college, Tran left the apartment that features in many of his YouTube videos. He now rents a house with friends, a place just outside Los Angeles. “We call it The Grind House,” he says. The Grind House? “It’s where we’re going to grind on our stuff for a year and decide what to do from there. There’s not much of an art scene in my area, but I love the motivational energy that the house has.” 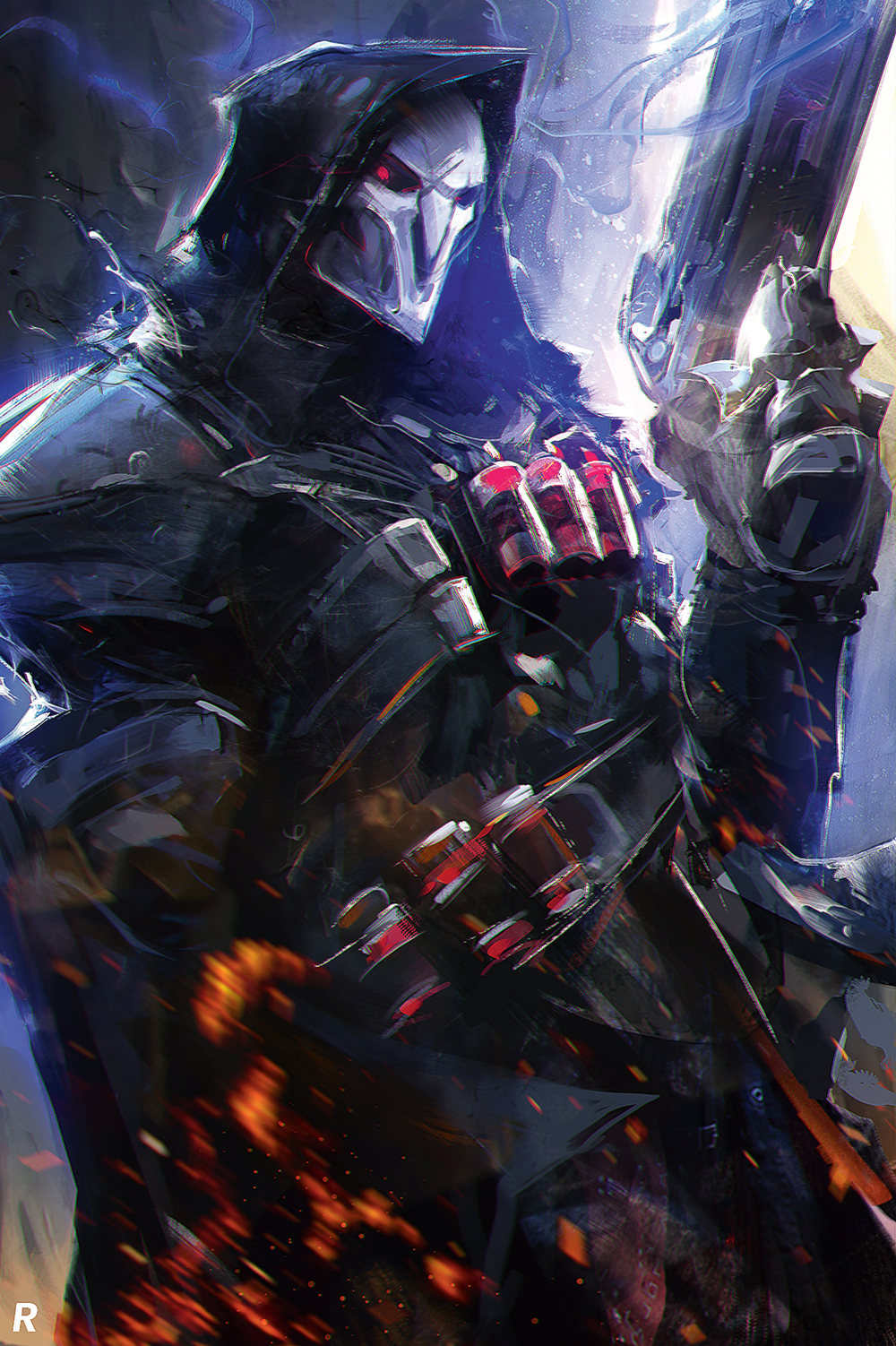 “This piece was commissioned for the deviantART+Blizzard Campaign ‘21 Days of Overwatch’. It’s probably my best seller at my first convention, Anime Expo.”

“Motivational energy” is a perfect term. It’s in everything Tran says and does. You can still see his influences in his work. There’s a bit of Jaime Jones in there, some Craig Mullins and Claire Wending. But despite his youth, he has found a style, voice and motivational energy of his own – and, perhaps most importantly, a platform on which to share it. That’s the one piece of advice he’s keen to get across: do it your own way, on your own terms.

“My videos are funded by my amazing supporters on Patreon. I’m blessed to have fans who love what I do and who want the exclusive content that comes with each episode. Patreon is definitely a career option for artists.” Tran's endorsement of Patreon comes with a caveat, however: only launch when you’re ready. “I held off on making my page until I knew I had quality content for the people who supported me. 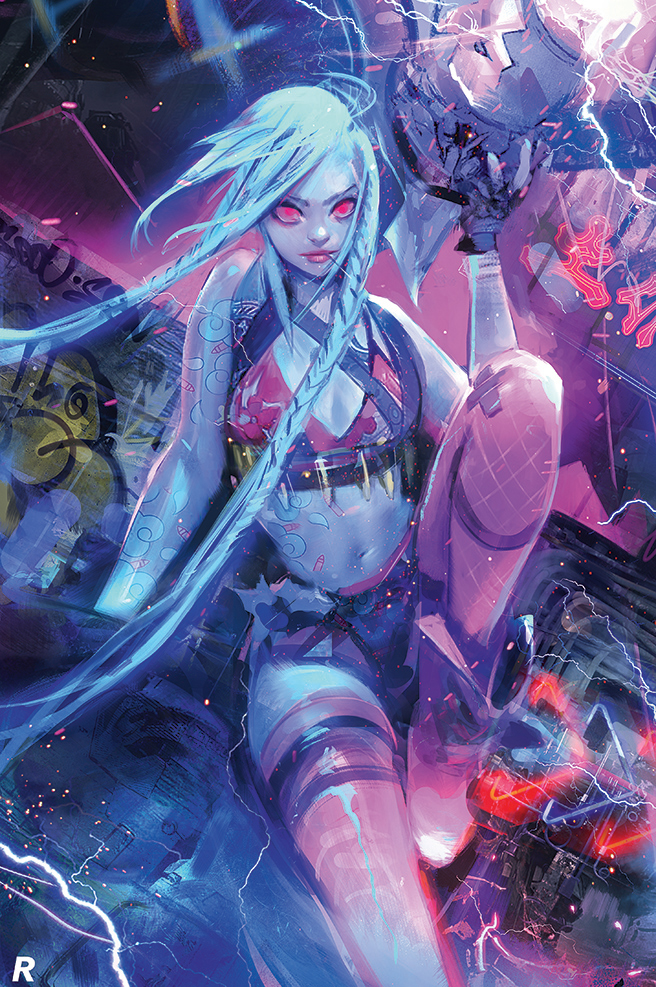 “There’s always a whimsical element to my work, either in the colours or the composition.”

“If you do what you love, numbers and finance shouldn’t matter,” Tran adds. “I have friends who absolutely love their studio jobs and want to be surrounded by people. I also had friends who quit those jobs, made a Patreon and earned less, but loved what they do.

“I think it’s about finding your own instrument and how to operate at your fullest potential. In today’s industry – and society – we too often compare ourselves to others, which fuels our inner self-critic. We’re all on our own journey at our own pace. We all have different inspirations, a different drive that propels us forward.”

This article was originally published in ImagineFX magazine issue 140.