Everyone is waiting for Apple to follow in the footsteps of its rivals and finally announce the design of a foldable phone. According to a prominent leaker-of-all-things-Apple, Jon Prosser, the tech giant could be getting closer with its recent prototypes – but, crucially, the design may not contain a flexible screen.

Apparently, Apple is working on a dual screen model, which has two separate screens put together as one, complete with a hinge. Even though Apple usually comes top of the class for its product design and innovation (the iPhone 11 is one of our best camera phones, after all), commenters have already begun to pour mirth on the idea, and the memes aren't pretty.

Source Jon Prosser is quick to defend Apple's potential design, pointing out in a separate tweet that, although the memes are funny, "it doesn't look like they just stuck two phones together. Even though they're separate panels, when the displays are extended, it looks fairly continuous and seamless".

Reactions weren't entirely scornful, though. One, more positive, angle was the Twitter user excited about a futuristic Westworld-style tablet (above).

Apple did file a patent back in March outlining plans for a "system with multiple electronic devices", which would solve the problem of the crease that is bound to occur along a flexible screen. It would also deal with the the fragility of a foldable device, a problem that has plagued the development of foldable screens at rival companies. 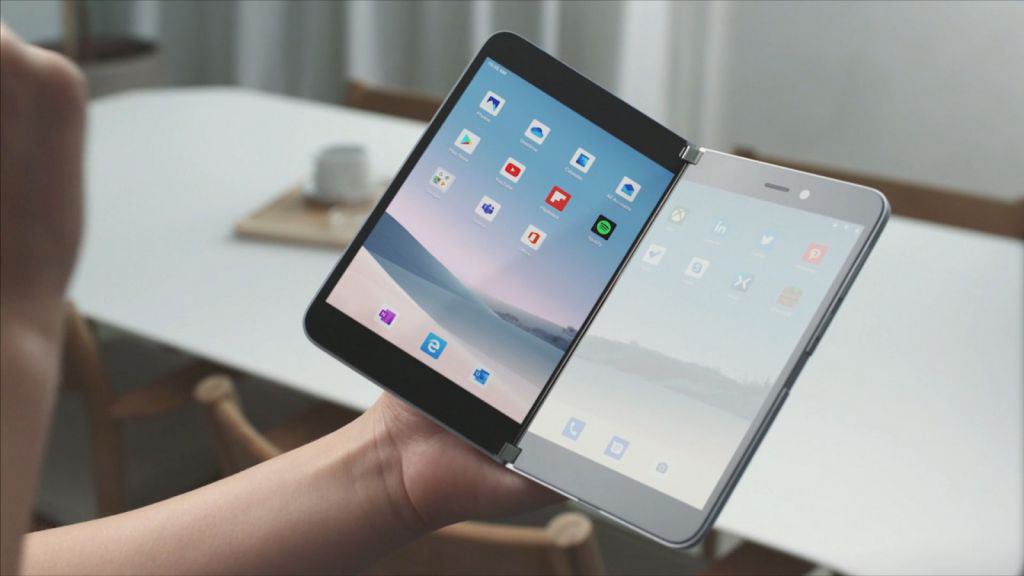 Will Apple’s foldable device look like the Surface Duo?

The closest reference point to a dual screen device of this nature is Microsoft's upcoming Surface Duo (above) but is Apple's foldable phone likely to go down this route? Other Twitter users are questioning the very definition of a foldable device, asking: if it has two screens, what sets it apart from a flip phone?

But user Mr Dan Master disagrees, pointing out that it's display size, rather than the method of folding, that makes a phone foldable.

Whether or not Apple is rewriting the rules of a foldable phone with its proposed plans, we're sure it won't look like the examples being thrown around on Prosser's twitter feed, which are hilariously clunky and crudely put together (except the Westworld tablet, of course, which would be brilliant). Plus, there's nothing to say Apple isn't currently working on a bunch of solutions for the foldable iPhone, including a flexible screen.

This foldable iPhone concept design sparked our imaginations last month, and though it is careful to avoid having to deal with the issue of the screen crease, we would hope to see something as sleek from Apple if it ever actually releases a foldable phone.

If you're not bothered about whether your phone can bend or not, here are the best non-folding iPhone deals available now.

Is this Apple’s most ludicrous move yet?The best Apple Pencil alternatives in 2020Apple's bendable MacBook will blow your mind

Why copywriting is more important than you think Smashing Podcast Episode 18 With Mina Markham: How Can I Learn React?
Scroll to top