Blog
You are here: Home / Blog / Random Stories / 5 things you didn't know about Photoshop for iPad

It’s fair to say Adobe really has pulled some impressive updates out the bag for Adobe MAX 2018. But, without a doubt, the biggest buzz came on Monday when Adobe chief product manager Scott Belsky introduced Photoshop for iPad. A 15,000-strong crowd went wild as Belsky handed over to product project manager Jenny Lyell, who demonstrated some of the app's capabilities, stating: "This is not a watered down version, this is full Photoshop on the iPad."

However, despite the impressive demo, getting any further information about the app, in terms of price and release date, was like getting blood out of a stone. Adobe is keeping a lot of information about Photoshop for iPad close to its chest, but we managed to get a few minutes with Lyell, who gave us a little more insight into this tablet-version of Photoshop…

Approximately three years in the making, Photoshop for iPad came about after two engineers realised user demand via constant online searches for the term Photoshop for iPad. They decided their next challenge would be to see if it was actually possible to get the 28-year-old code base of Photoshop onto a tablet. For years, Adobe had tried it with other apps, including Sketch and other drawing apps, but these didn’t have the code base of Photoshop. So that was the dream, that was the challenge.

"The code base for Photoshop is 28 years old, it’s a mammoth," says Lyell. "So how do you even comprehend that?"

But a small team at Adobe believed it was possible, and so chatted with their leaders in engineering and product, who gave them the blessing to go work on the project. The project was to be kept quiet in the early stages. "Some people were extremely skeptical in the company and weren’t sure we should be investing in this," says Lyell. Bet those guys feel silly now, huh?

As the technical aspects were going on with the development of Photoshop for iPad, Lyell was busy talking to customers, asking them questions like 'why do you actually want it on iPad? What does it help you with, what problem are/will you be solving with this software?'

"So much of the product roadmap is influenced by our customers," says Lyell. "Once we saw the life of this happening, we knew that we wanted to preview and announce it. But I didn’t want us to get away from the customers, and so we recruited this small group of people to work on the alpha build.

"At this point there were literally only five features in there. We set their expectations, telling them it would be like using Photoshop 1.0, but that we wanted them to run with us, from the beginning, and give us as much feedback as possible so we could make sure that even at the preview stage, the product we were creating was what the users wanted. Diverting from customers' needs, even just slightly early on, could have had huge ramifications. Customers have to be by our side."

03. It can handle hundreds (if not thousands) of layers 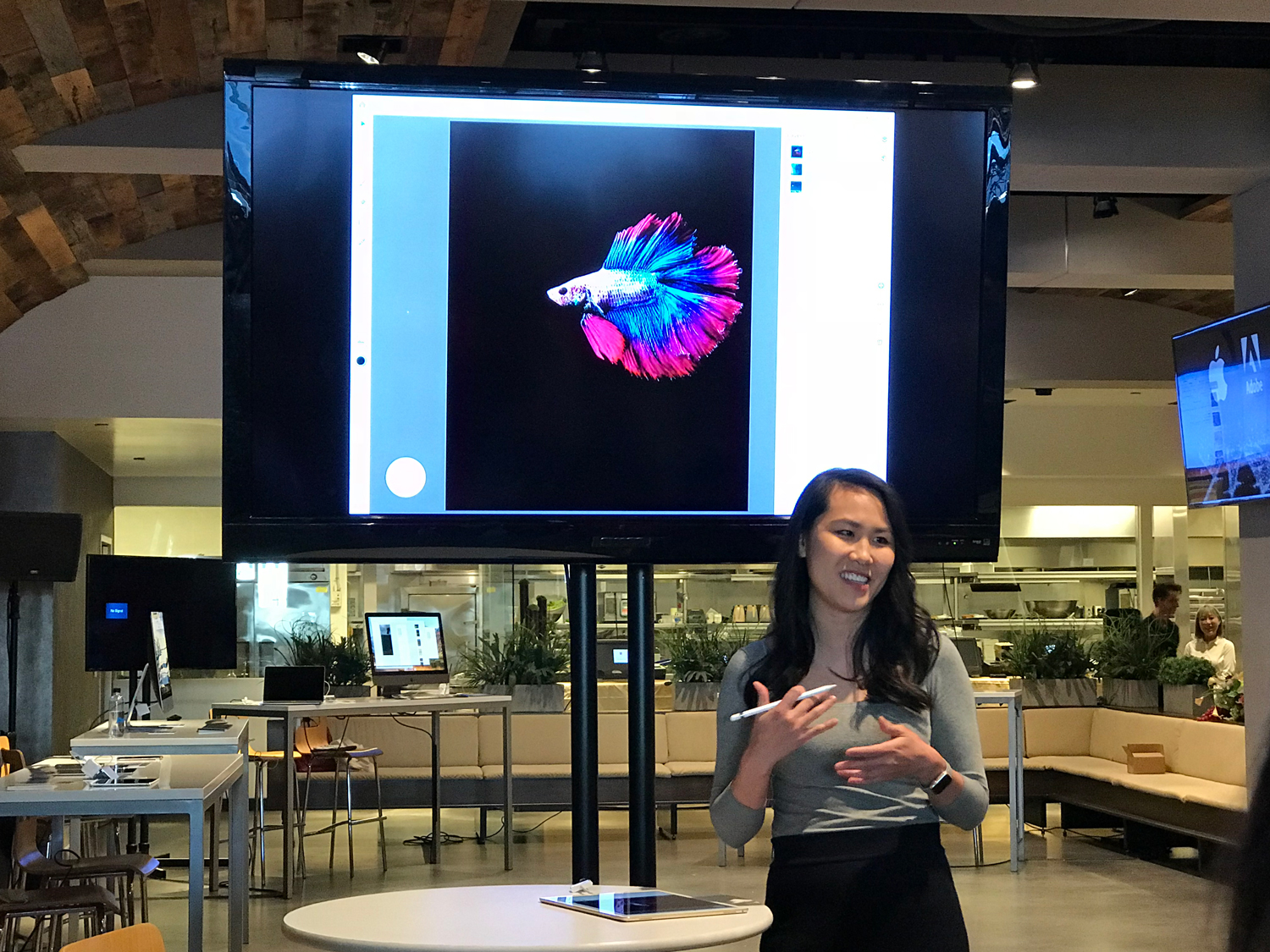 At a private Apple event, Photoshop for iPad product lead Jenny Lyell delved a little deeper into the app’s capabilities

As the Adobe design team collected hours and hours of one-on-one interviews, trying to understand user needs, there was a breakthrough moment in the timeline when they got large PSD to open on the iPad. "The whole team was in tears, freaking out," Lyell says. “This is impossible, we thought. But we’d seen it with our own eyes!"

So what constitutes a large PSD? "It was hundreds of layers that we got to open," says Lyell. With the same code base as Photoshop on desktop, Photoshop on iPad will open up any size PSD file. When asked if this would present any technical limitations, Lyell told us: "It would affect it just as a massive document on any machine would. So having the biggest single file on your mac would slow you down a few seconds vs a smaller one. Photoshop for iPad will work in a similar way, but we've optimised it a lot in terms of performance and we didn’t want to bring this out until we knew the hardware and software was ready."

04. It won't necessarily feature all your PS favourites

If you're expecting to see the full toolset in this app, you'll be disappointed. Instead, the company has armed it with all the core tools users need to do real work in Photoshop. "Photoshop has a dozen different ways you can select an object – the 1.0 functionality is still in the code base!" says Lyell. "So we’re really rethinking how to give users all the core tools they need to do all the work they need, and give them the modern, best version of these tools so that they don’t have to feel any frustrations or inefficiencies."

Part of the update to Photoshop CC this year includes a new Adobe Sensei selection tool. When asked if Photoshop for iPad will include this, Lyell was quick to confirm. "We definitely want to get the newest Sensei technology in there, so it’s prioritised on the roadmap," she says.

Adobe is pretty elusive about release dates and pricing models for Photoshop for iPad. When asked about when creatives can actually get their hands on the app (and trust us, we were persistent), we weren't even able to get a rough estimate as to when this is expected to ship.

"It will be available in 2019, and we're still working out the business model in terms of pricing," Lyell said. We also asked whether it will be part of the CC suite or if Adobe is going to offer this as a standalone product and were told "we’re having conversations about that right now".

Android users, we didn't forget about you either. When asked if this will be an iPad-only app, Lyell replied with: "Our plan is to extend to as many devices as we can right now. We still trying to sort out what's the best experience, and so are testing the different versions to see what’s optimised and what’s best for performance. We don’t want people having a poor experience, so that information will also come out during the launch."

For what will almost certainly be a highly sought-after product, it’s a little frustrating to have no details as to when we can realistically expect this to ship to the masses. That said, 2019 is just around the corner, so let's hope it's sooner rather than later.

Live Accessibility And Performance Audits At SmashingConf Toronto CSS Border-Radius Can Do That?
Scroll to top