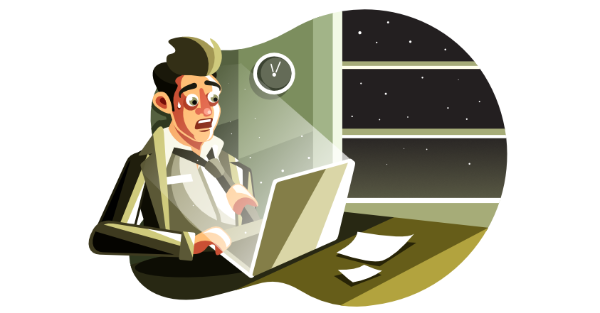 “Jerry wouldn’t let me go to the emergency room.”

Jenny010137 recounted her story on Reddit. She had a major health crisis, but Jerry, her boss, wasn’t buying it.

Jerry wouldn’t let me go to the emergency room after the heavy vaginal bleeding I had been experiencing suddenly got way worse. I went over his head and got permission to go. I called my mom, told her to meet me in the ER. The ER nurse said he’d never seen so much blood. An ER nurse said this. It’s determined I need a couple of blood transfusions and will be admitted.

My mom calls Jerry, who then proceeds to tell her that it’s just stress, and I NEED TO GET BACK TO WORK. At this point, I couldn’t even lift my own head up, but sure, I can take a bus across town and go back to work.

Doctors told Jenny they found a large growth that needed a biopsy.

They found a large growth that needed a biopsy. Jerry kept insisting that it couldn’t be cancer because I’d be tired and losing weight. I had lost eight pounds in a week and went to bed the minute I got home. I was still recovering from the procedure when Jerry called me to let me know I was fired for taking too much time off. Five days later, I was diagnosed with cancer. Fuck you, Jerry. Fuck you.

Think about that for a second.

Jenny is losing blood rapidly. There’s a good chance she’s dying. Her boss can’t be bothered to verify that she’s okay. While she’s in the hospital fighting for her life, he fires her for taking “too much time off.”

This situation is obviously one to walk away from.

But it’s not always so clear cut.

Sometimes you’re in a situation where there are both positive and negative aspects of the job. With situations like these, the decision isn’t always as obvious as we’d like it to be. Walk away from a promising position prematurely and you may burn bridges and destroy any goodwill you’ve built up.

What’s the best way to know?

If you focus on the signs, you may be right, but too much uncertainty means you may handle things in a way that’s less than ideal.

Focus your attention on the right set of principles and you’ll have the framework you need to decide when it’s time to quit your job (or not). Let’s take a look at these principles.

Principle #1: Your Job Violates Your Boundaries

Art Markman, professor of psychology at the University of Texas at Austin, shared a story relayed to him by a reader.

My mother suddenly passed away on a Friday evening. On the Sunday my boss showed up to my house with groceries and flowers and suggested that I go into the office on Monday for the quarterly meeting. After all, “this was a pivotal time” for the business.

I didn’t go in the next day because of my overwhelming grief. I later found out that I was to receive an award on that Monday. Was this a career-limiting move, or is my boss not clear on boundaries?

This boss meant well, but his concern was self-serving and not at all in the best interests of his employee. What’s worse, he may not have understood why it was a problem if his employee spoke to him about it later on.

This is why you need boundaries.

Boundaries act as gatekeepers in a variety of professional, emotional, social, physical and situations. Here’s why you need boundaries and why they’re so important:

They protect you from abusive or toxic behavior (for example, managers or co-workers making inappropriate demands, verbal abuse, inappropriate conversation, or details that are immoral or infringe on your values).
Boundaries define how others can or should communicate with you.
Good boundaries protect you from sacrificing your autonomy, freedom of choice, family, identity, integrity or contacts.
Great boundaries attract more of the people, projects and opportunities you want. When set up appropriately, these boundaries repel the items you don’t want.

How do you set great boundaries?

It’s a simple process. First, determine what you do and don’t want. Next, figure out what your employer wants or doesn’t want.

But setting boundaries is risky.

Consider this common idea: Tell your boss No and you could get fired (or worse). If developers are smart, they’ll avoid biting the hand that feeds them.

This rationale is trash.

If you set a boundary, it will be tested. Those around you — your manager, co-workers, other developers — will attempt to back you into a corner. You’re going to have to find appropriate ways to rise to the challenge and enforce your boundaries.

Why go to the trouble? Because boundaries limit the damage from the other four principles discussed in this article. If you don’t have strong boundaries, you’ll face the problems discussed here. It doesn’t matter if you’re employed or you own your own business.

If you have poor boundaries, you won’t be able to achieve your goals.

Principle #2: Your Job Goes Against Your Goals

Reddit user YellowRoses had goals until their boss torpedoed those goals.

How do you deal with feeling disrespected by your boss? from r/careerguidance

They were promised a promotion. They negotiated with their boss and earned a verbal agreement regarding their promotion, only for said promotion to be denied with an “Oh, that’s not happening now.” No explanation or attempts at justifying the rescinded promise.

What if your employer isn’t aware of your goals? Still doesn’t matter. If you have a specific goal in mind, you’re responsible for that goal. Not your co-workers, employer, or family members. Are you pushing for the director’s position that’s opened up? Prefer to stay in your current role but receive the same pay as managers? It’s on you.

This seems obvious, until you realize most people wait to be chosen. They wait for someone to approve of their audition, accept them, recruit them, promote them, extend a helping hand, etc. Which goes nowhere fast.

To be clear, it’s generally a good idea to discuss your goals with your employer, provided that you’re in a good place to do so. If your employer laughs at you, mocks your goal, or decides they’re unwilling to help you meet said goals, it’s on you to make it happen.

The post 5 Signs It’s Time to Quit Your Job appeared first on SitePoint.

Scroll, Refraction and Shader Effects in Three.js and React Understanding and Using rem Units in CSS
Scroll to top