Blog
You are here: Home / Blog / Random Stories / 10 of the best creative resumés

We all know finding work in the design industry is an extremely competitive process, even if you do have a killer design portfolio. With so many talented people around, just getting noticed is a job in itself.

Designers and illustrators around the world have long been coming up with unusual creative strategies to give their resumés an edge in the hunt for employment. If you're in need of inspiration for your own CV, here are some of the best creative resumés out there to help get the creative juices flowing. 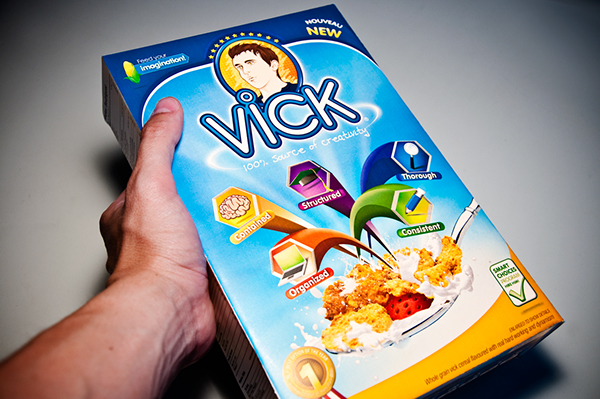 Colombian art director and designer Victor Rodriguez, also known as Vimarovi, has an appreciation for lots of different aspects of graphic design, including corporate identity, packaging and product design. So what better way to showcase all these interests than with a resume that brings together all these elements?

That's just what Rodriguez has done with the innovative VICK cereal box. Designed to look like an everyday cereal box, this CV humorously weaves his work history and creative skills into the design. Instead of ingredients, hungry clients will find information about his personality, strengths and previous employment, and if anyone needed any proof of Rodriguez's claims, the packaging speaks for itself. 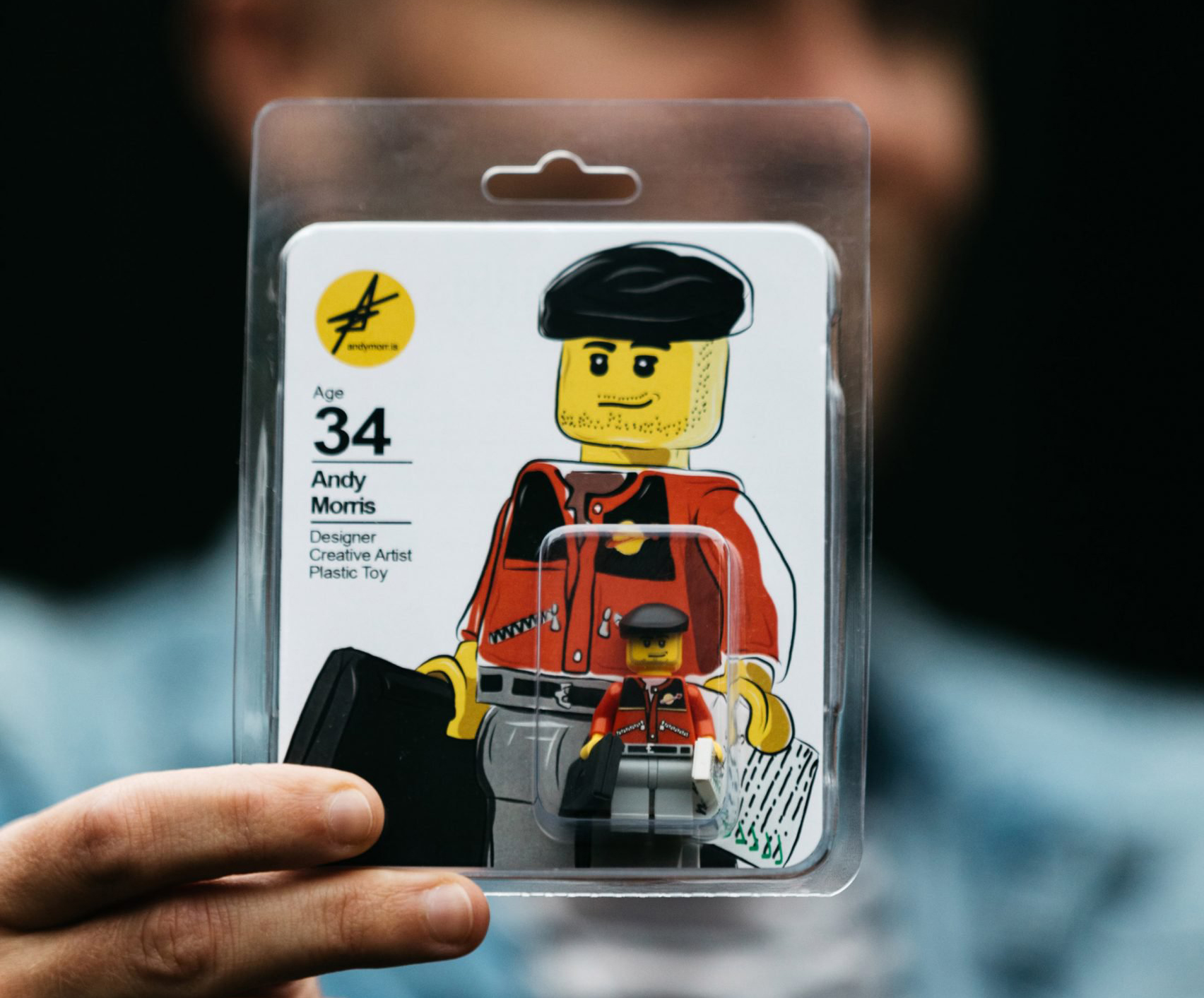 Andy Morris thought small when it came to his new CV

Art director, artist and designer Andy Morris caught the design industry's attention for all the right reasons with this fantastically creative resume. Rather than sticking with the traditional paper, Morris commissioned a LEGO minifigure in his own likeness, complete with a tiny laptop in one hand and a mini-CV in the other. To update prospective clients with the information they need, the packaging features a bitesized run-down of Morris' skills, plus contact details. 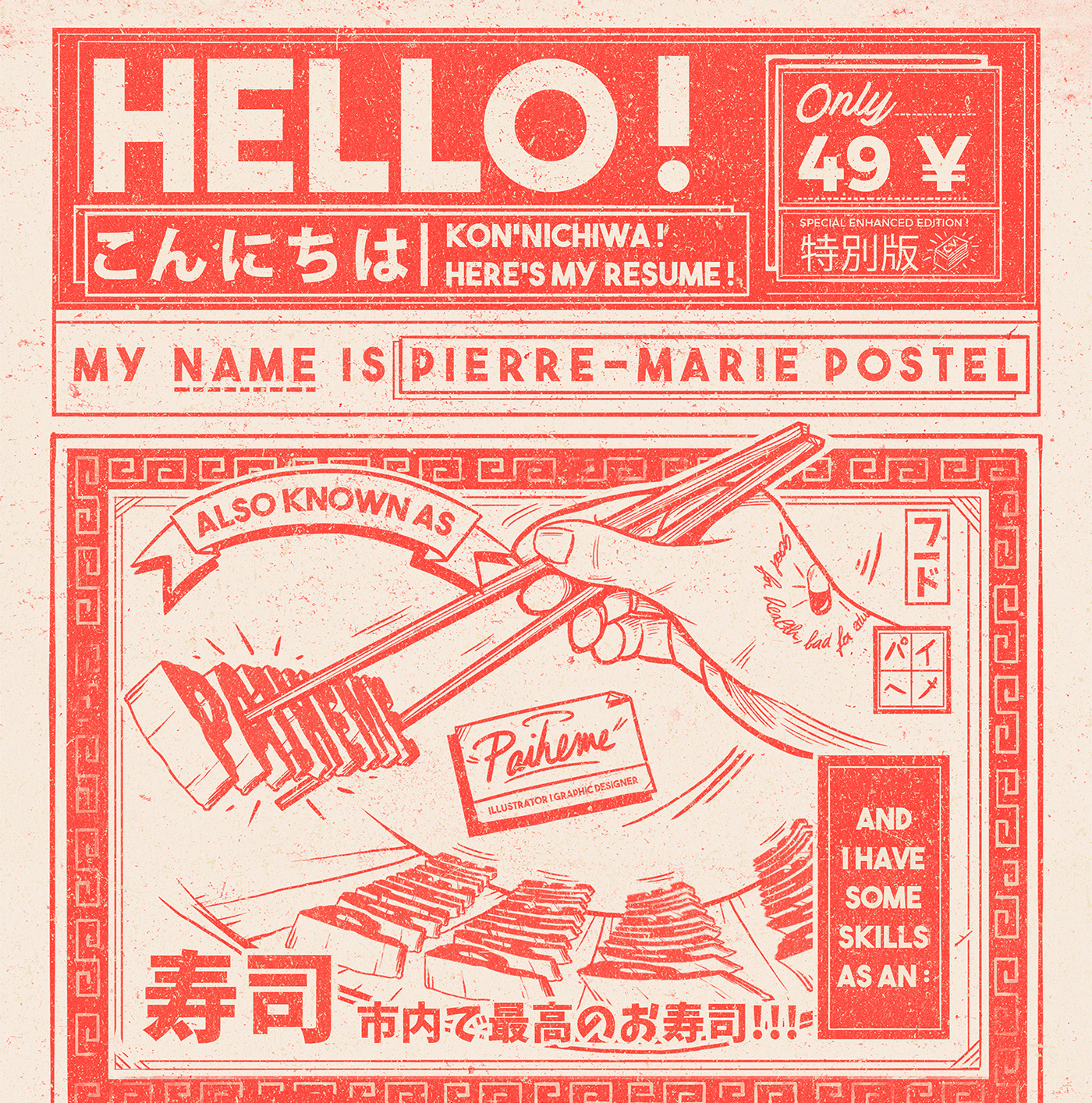 Graphic designer and illustrator Pierre-Marie Postel – also known as Paiheme – decided to use his CV to show off exactly what he's best at. His creative resume displays his impressive illustration style, and mimics a Japanese print advert.

It's not style at the expense of substance, however – this CV includes plenty of key information, plus some quirky additions such as character designs to show off Postel's personality. The monochrome colour palette ensures it doesn't become overwhelming. 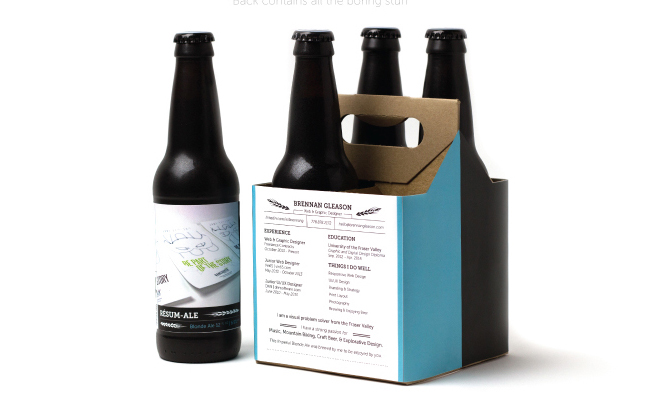 Interaction designer Brennan Gleason was nearing the end of university and needed to get his name known by potential employers. To do so in style he brewed up a batch of blonde ale, packaged it up in a neat cardboard carrier, and printed his CV on the back. The idea being that prospective employers could sit down for a quick drink and peruse Gleason's design skills at the same time. 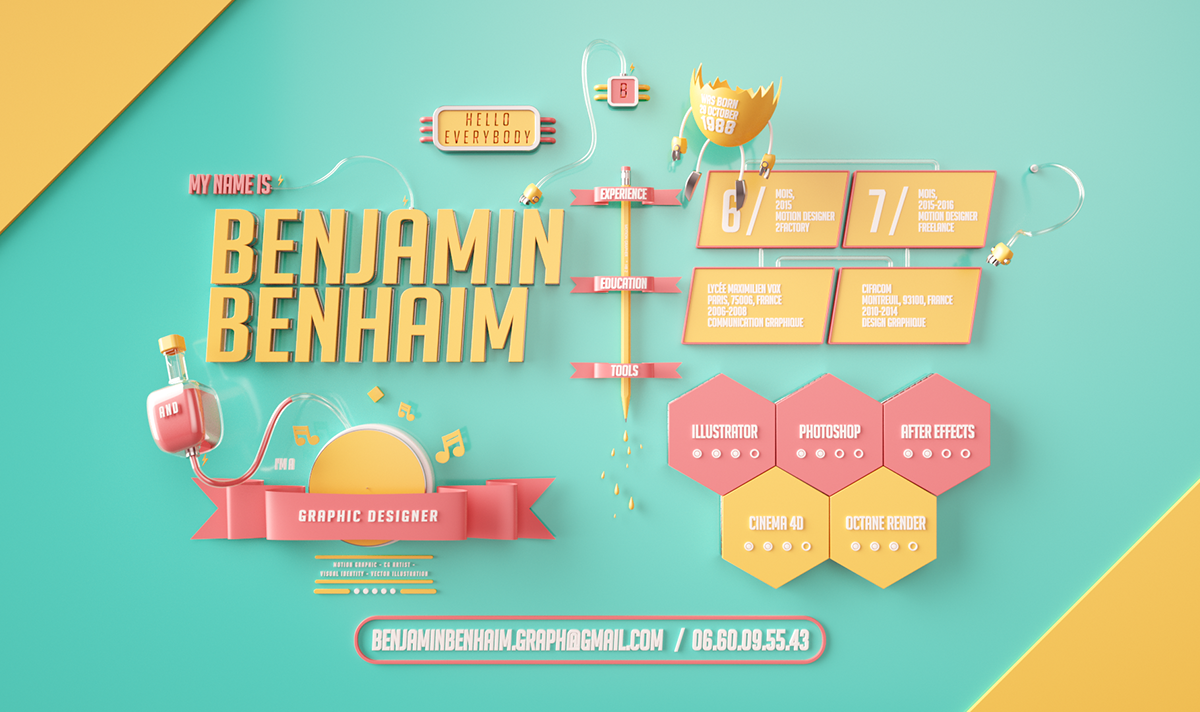 Inspired by this great-looking flat CV from Jimmy Raheriarisoa, Paris-based art director and motion designer Benjamin Benhaim set to work and made this stunning 3D rendered resumé. Created using Cinema 4D, Octane and After Effects, it covers all the bases and features plenty of playful touches, and each image took around seven minutes to render. Time well spent! 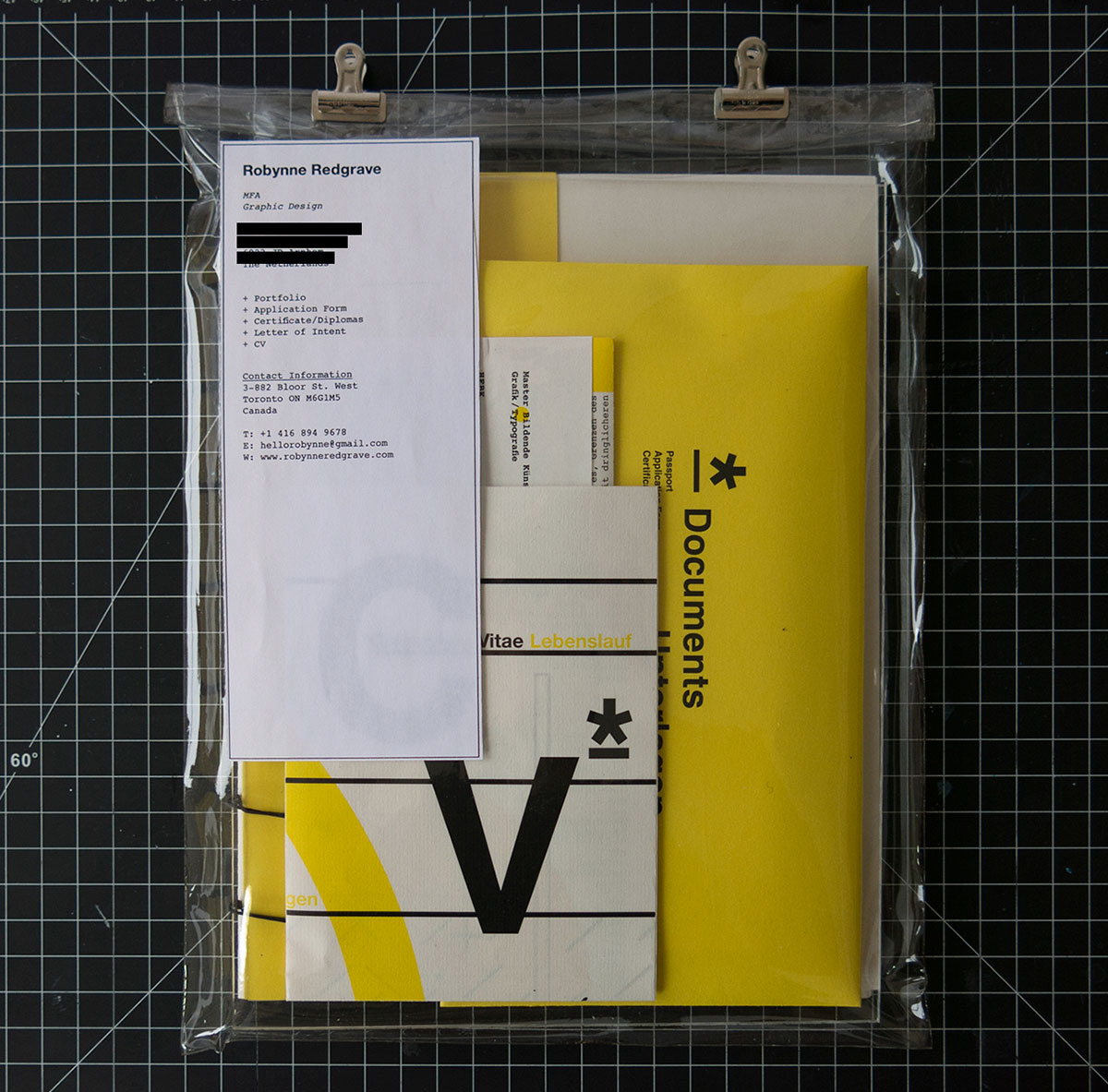 This portfolio mail package created by Robynne Redgrave, a Canadian graphic designer based in Helsinki, is a real attention-grabber. It contains not only her CV but a whole load of stuff including a hand-bound portfolio book, a letter of intent, application form and certificates. 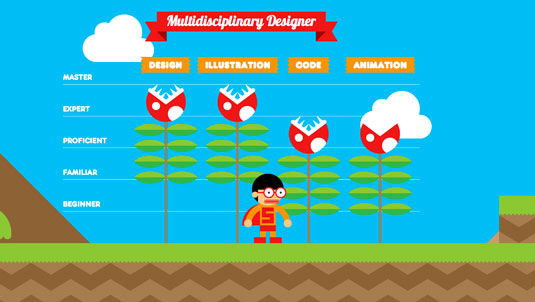 Robby Leonardi is a multidisciplinary designer based in New York City. Specialising in illustration, graphic design, animation, and front end development, he has worked with the likes of Fox, Speed TV, FX Networks, myNetworkTV and G4. His incredibly fun interactive design resumé will have you scrolling for hours! 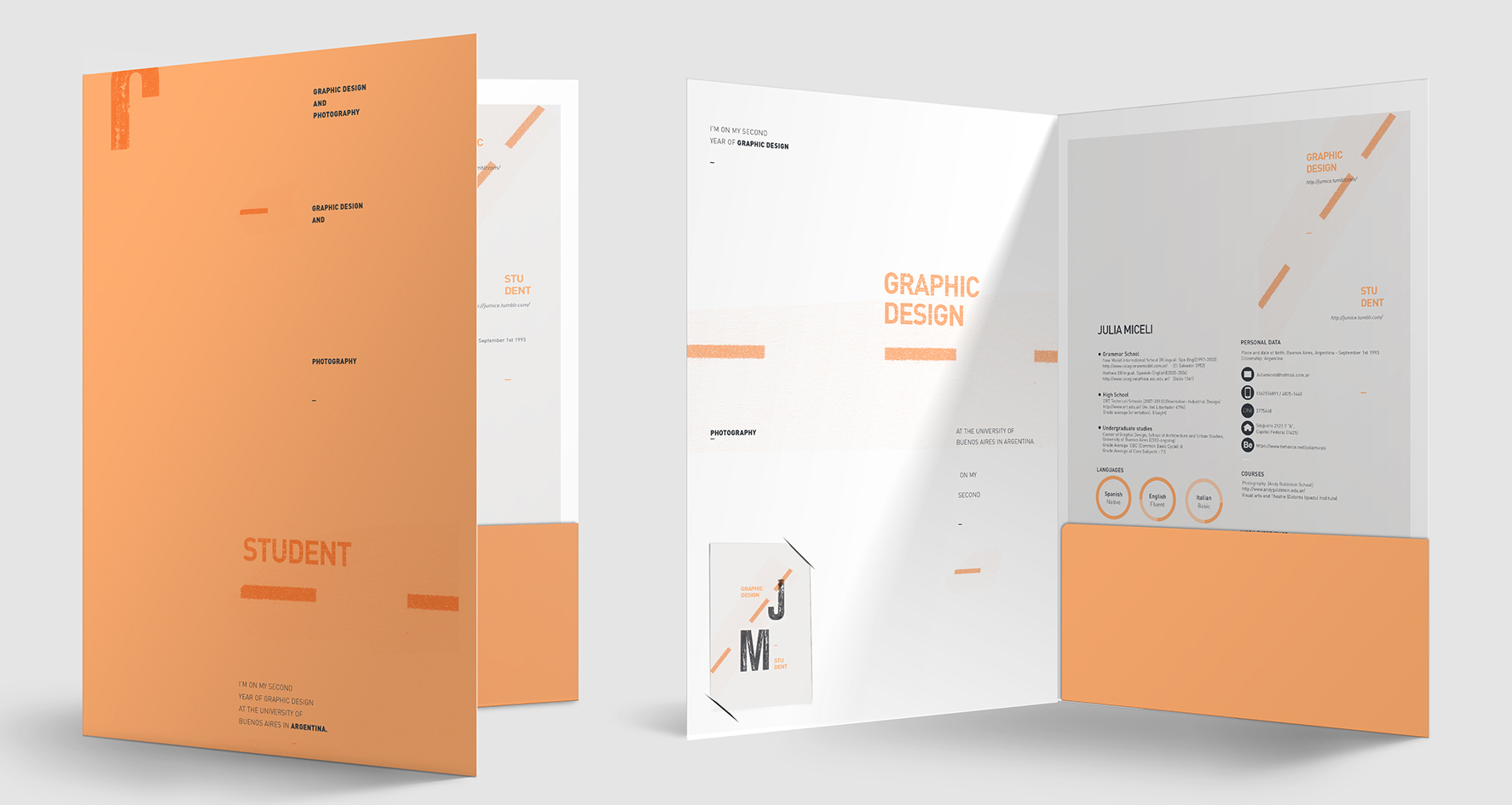 Julia Miceli – a graphic designer based in Buenos Aires, Argentina – managed to hit all the right notes with her creative resume. It's simple compared to many of the other in this list, but still oozes personality. The bold orange colour is unusual and eye-catching, and there isn't an element that hasn't been carefully art directed.

Miceli has also considered practical aspects: the CV is a standard A4 size, but sits in a wallet that shows it off to its full potential, and there's a neat slot that holds a business card the viewer can pop out and keep. 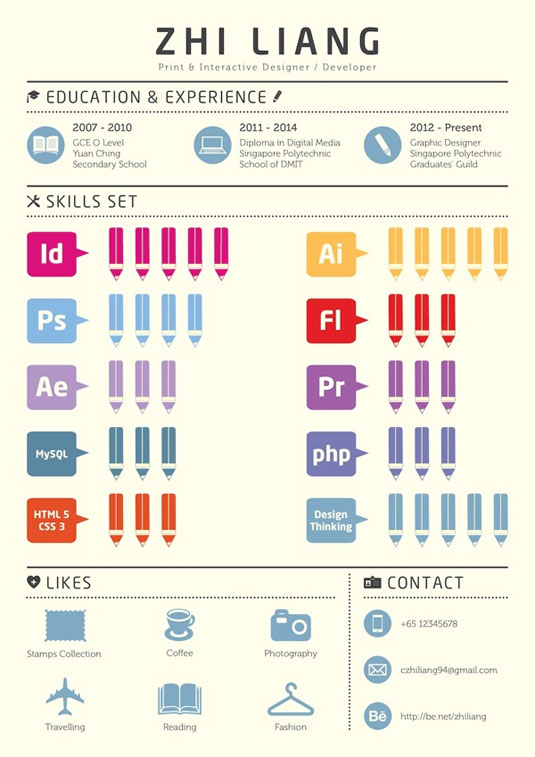 A simple and inventive approach to the résumé design

Singapore-based student Chen Zhi Liang was set a task by his graphic design tutor to create an inventive résumé that would make him stand out from the crowd. The semester-end assignment was to create an infographic résumé and we think he's come up trumps with this design.

Showcasing the all-important qualifications and skills, the résumé is eye-catching without being overwhelming. Liang's minimal approach is perfect for an overcrowded job market. We'd definitely hire him! 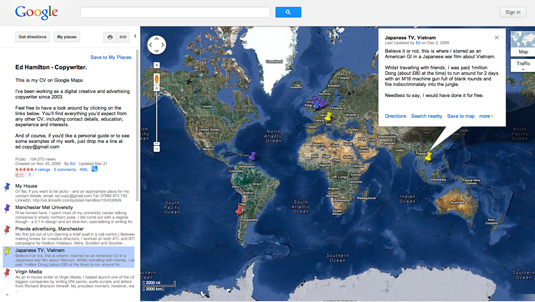 When London-based copywriter Ed Hamilton was out of work, he decided to put his time to good use and develop a creative way to stand out to prospective employers.