If you've have the chance to use one of Wacom’s large-format pen displays, you'll know why these drawing tablets are used in studios around the world.

Wacom’s previous flagship model, the Cintiq 27QHD, provided artists with an impressive 27 inches of screen space at a resolution of 2,560 x 1,400 pixels. As the push for Ultra High Definition content increases, however, artists are beginning to need more resolution and screen space than ever before.

Step up the Wacom Cintiq Pro 32. It isn't yet on sale – but we got our hands on the latest model in Wacom’s Cintiq family to give it a spin…

The Wacom Cintiq Pro 32 features a 4K UHD display spanning an impressive 32 inches, with a resolution of 3,840 x 2,160 pixels. With four times the pixels of a standard 1080p display, the Cintiq Pro 32 provides plenty of work space, allowing users to display important toolbars without eating into that precious screen space.

Unlike the Wacom Cintiq Pro 24 (another new release) and previous generation Cintiqs, which came in touch and non-touch variants, the Wacom Cintiq Pro 32 comes with touch functionality as standard. Despite the larger screen, the Cintiq Pro 32 is only 8.5cm wider and 4cm taller but uses a smaller bezel, meaning more screen space without taking over too much desk.

Both Cintiq Pro models come with Wacom’s Pro Pen 2, featuring 8,192 levels of sensitivity, plus tilt-response for a more natural and virtually lag-free drawing experience. The displays also come with the ExpressKey Remote, a controller that houses the buttons and touch ring commonly found along one edge of the earlier Cintiq models.

The separation of this remote from the main body of the display allows for seamless switching between left and right-handed modes, and the non-slip backing means the remote can be placed anywhere on the face of the device, with magnetic strips down either side to hold the remote in place when the display is positioned vertically. 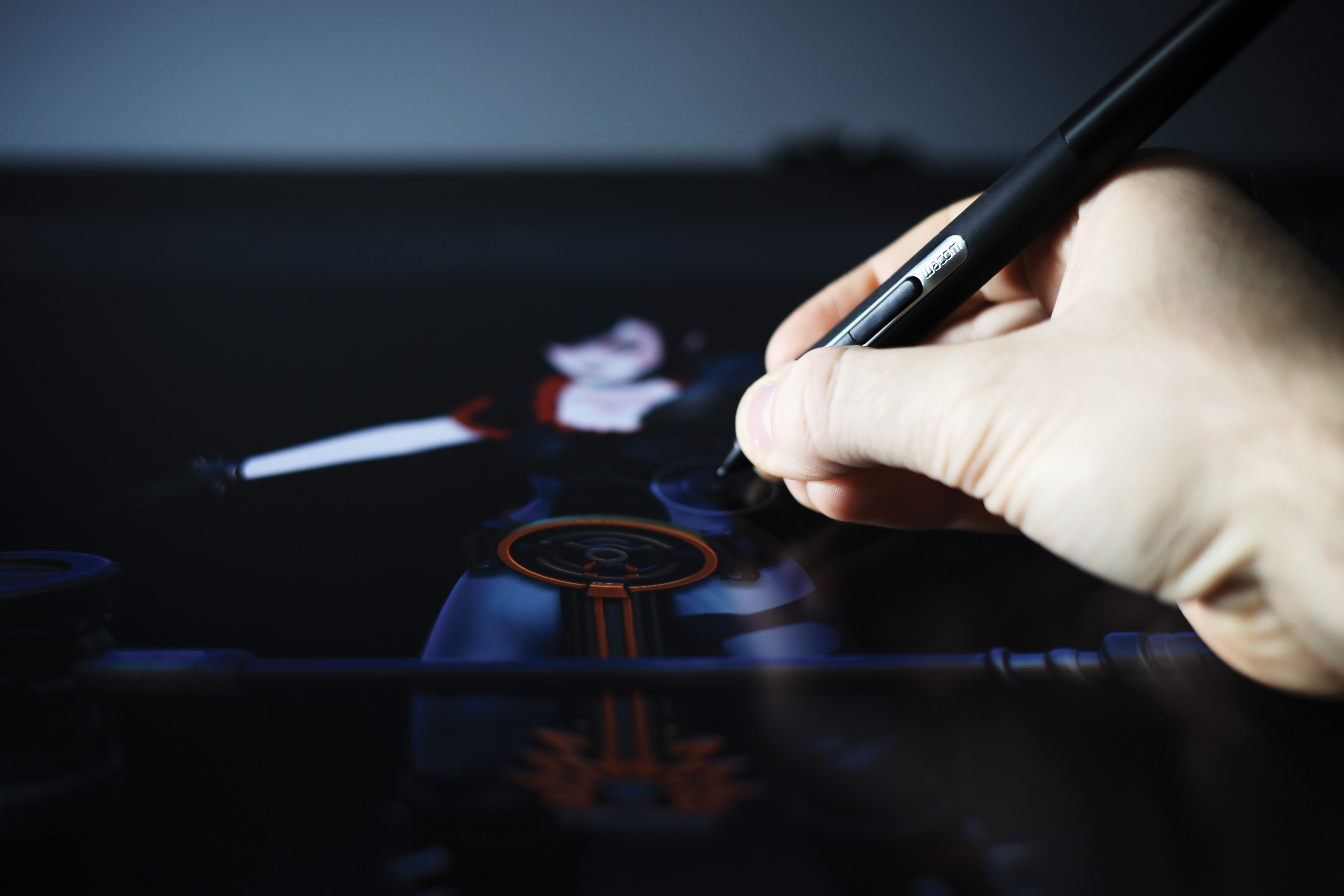 8,192 levels of pressure sensitivity and unparalleled tilt recognition means that every stroke is naturally precise

In order to rotate the display more freely, the optional Ergo Stand is required. This allows the display to be set vertically like a standard monitor, and horizontally at standing height or desk level. Out of the box, the back of the display features two fl ip-out legs to support the device at a 20-degree angle to the desk.

When used in a bright studio environment, glare may present an issue. Compared to the 27QHD, which has a more reflective screen coating, the Pro 32 has taken steps towards solving this issue with an etched glass screen that diffuses those harsh reflections.

This is also helped by turning off room lighting and using a desk light, or by using the Ergo Stand to angle the device away from the light source.

Towards the rear of the display, there is a panel which can be removed to reveal the various ports and sockets used to connect your display to your work machine. These include:

With four times the pixels of a standard 1080p display, users to display important toolbars without eating into precious screen space.

Located around the side edges of the display are four USB 3.0 ports, with two on either side for device connectivity such as charging the ExpressKey Remote. There is also a 3.5mm headphone jack on the left side and a SD card VERDICT slot at the right, both located under the USB ports.

At the top edge of the display is the power switch and LED power indicator. On the top left above the screen, there is a series of touch buttons that enable you to call various functions from your machine such as the on-screen keyboards, access Wacom settings or enable and disable the touch function.

There is also a button that enables toggling between the display input mode for the device which was absent from the 27QHD, meaning cables no longer have to be swapped between machines. In the studio, we have a USB-C enabled laptop plugged in via the included USB-C cable, with a workstation plugged into the display through a USB 3.0 and DisplayPort cable. This means machines can be swapped with the press of a button and with no rummaging around under the desk.

The use of the USB-C for this generation greatly reduces cable clutter, as both the display signal and USB connectivity can be run through one cable. Unlike the Cintiq MobileStudio Pro, the Pro 32 does not feature any external USB-C ports, which will be welcomed by those who are unprepared to upgrade all of their devices to USB-C.The Cintiq Pro 32 offers a large screen size, with the resolution perfect for displaying UHD content.

The extra space is also ideal for users who require specific toolbars and custom user interface layouts without limiting canvas or viewport size. Additionally, there is also the option to transform your Cintiq Pro into a powerful standalone creative pen computer with the Wacom Cintiq Pro Engine PC module.

This article was originally published in issue 233 of 3D World, the world's best-selling magazine for CG artists. Buy issue 233 here or subscribe here.

Sharing Code Between Projects: Lessons Learned In The Trenches Jump start your app career with this bundle
Scroll to top